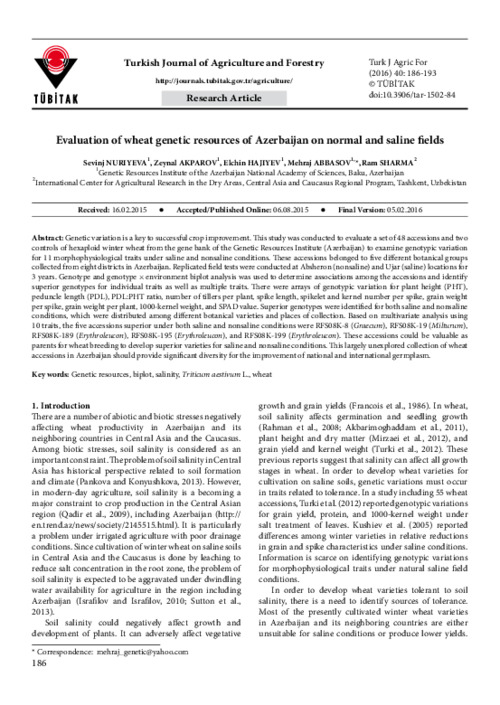 Genetic variation is a key to successful crop improvement. This study was conducted to evaluate a set of 48 accessions and two controls of hexaploid winter wheat from the gene bank of the Genetic Resources Institute (Azerbaijan) to examine genotypic variation for 11 morphophysiological traits under saline and nonsaline conditions. These accessions belonged to five different botanical groups collected from eight districts in Azerbaijan. Replicated field tests were conducted at Absheron (nonsaline) and Ujar (saline) locations for 3 years. Genotype and genotype × environment biplot analysis was used to determine associations among the accessions and identify superior genotypes for individual traits as well as multiple traits. There were arrays of genotypic variation for plant height (PHT), peduncle length (PDL), PDL:PHT ratio, number of tillers per plant, spike length, spikelet and kernel number per spike, grain weight per spike, grain weight per plant, 1000-kernel weight, and SPAD value. Superior genotypes were identified for both saline and nonsaline conditions, which were distributed among different botanical varieties and places of collection. Based on multivariate analysis using 10 traits, the five accessions superior under both saline and nonsaline conditions were RFS08K-8 (Graecum), RFS08K-19 (Milturum), RFS08K-189 (Erythroleucon), RFS08K-195 (Erythroleucon), and RFS08K-199 (Erythroleucon). These accessions could be valuable as parents for wheat breeding to develop superior varieties for saline and nonsaline conditions. This largely unexplored collection of wheat accessions in Azerbaijan should provide significant diversity for the improvement of national and international germplasm.