Energy Consumption in Onion and Potato Production within the Province of El Hajeb (Morocco): Towards Energy Use Efficiency in Commercialized Vegetable Production 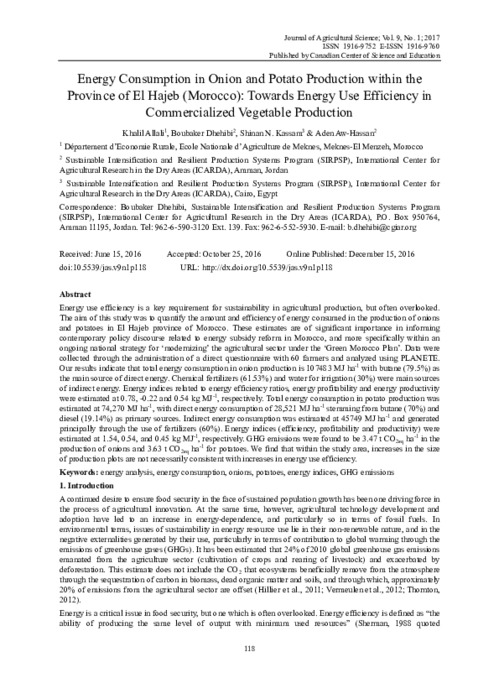 Energy use efficiency is a key requirement for sustainability in agricultural production, but often overlooked. The aim of this study was to quantify the amount and efficiency of energy consumed in the production of onions and potatoes in El Hajeb province of Morocco. These estimates are of significant importance in informing contemporary policy discourse related to energy subsidy reform in Morocco, and more specifically within an ongoing national strategy for ‘modernizing’ the agricultural sector under the ‘Green Morocco Plan’. Data were collected through the administration of a direct questionnaire with 60 farmers and analyzed using PLANETE. Our results indicate that total energy consumption in onion production is 107483 MJ ha-1 with butane (79.5%) as the main source of direct energy. Chemical fertilizers (61.53%) and water for irrigation (30%) were main sources of indirect energy. Energy indices related to energy efficiency ratios, energy profitability and energy productivity were estimated at 0.78, -0.22 and 0.54 kg MJ-1, respectively. Total energy consumption in potato production was estimated at 74,270 MJ ha-1, with direct energy consumption of 28,521 MJ ha-1 stemming from butane (70%) and diesel (19.14%) as primary sources. Indirect energy consumption was estimated at 45749 MJ ha-1 and generated principally through the use of fertilizers (60%). Energy indices (efficiency, profitability and productivity) were estimated at 1.54, 0.54, and 0.45 kg MJ-1, respectively. GHG emissions were found to be 3.47 t CO2eq ha-1 in the production of onions and 3.63 t CO2eq ha-1 for potatoes. We find that within the study area, increases in the size of production plots are not necessarily consistent with increases in energy use efficiency.