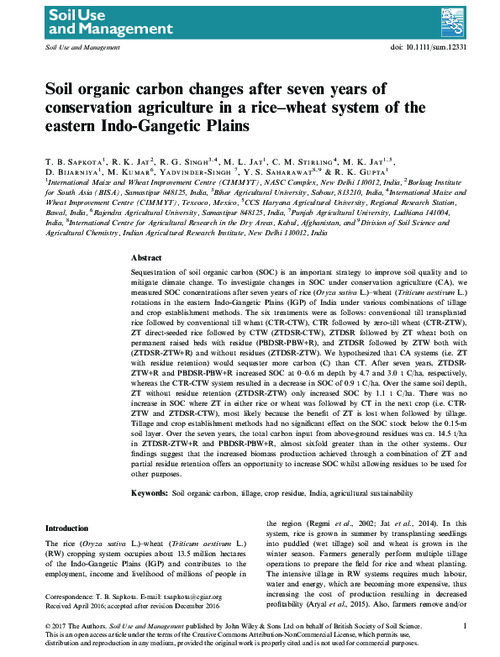 Sequestration of soil organic carbon (SOC) is an important strategy to improve soil quality and to mitigate climate change. To investigate changes in SOC under conservation agriculture (CA), we measured SOC concentrations after seven years of rice (Oryza sativa L.)–wheat (Triticum aestivum L.) rotations in the eastern Indo-Gangetic Plains (IGP) of India under various combinations of tillage and crop establishment methods. The six treatments were as follows: conventional till transplanted rice followed by conventional till wheat (CTR-CTW), CTR followed by zero-till wheat (CTR-ZTW), ZT direct-seeded rice followed by CTW (ZTDSR-CTW), ZTDSR followed by ZT wheat both on permanent raised beds with residue (PBDSR-PBW+R), and ZTDSR followed by ZTW both with (ZTDSR-ZTW+R) and without residues (ZTDSR-ZTW). We hypothesized that CA systems (i.e. ZT with residue retention) would sequester more carbon (C) than CT. After seven years, ZTDSR- ZTW+R and PBDSR-PBW+R increased SOC at 0–0.6 m depth by 4.7 and 3.0 t C/ha, respectively, whereas the CTR-CTW system resulted in a decrease in SOC of 0.9 t C/ha. Over the same soil depth, ZT without residue retention (ZTDSR-ZTW) only increased SOC by 1.1 t C/ha. There was no increase in SOC where ZT in either rice or wheat was followed by CT in the next crop (i.e. CTR- ZTW and ZTDSR-CTW), most likely because the benefit of ZT is lost when followed by tillage. Tillage and crop establishment methods had no significant effect on the SOC stock below the 0.15-m soil layer. Over the seven years, the total carbon input from above-ground residues was ca. 14.5 t/ha in ZTDSR-ZTW+R and PBDSR-PBW+R, almost sixfold greater than in the other systems. Our findings suggest that the increased biomass production achieved through a combination of ZT and partial residue retention offers an opportunity to increase SOC whilst allowing residues to be used for other purposes.