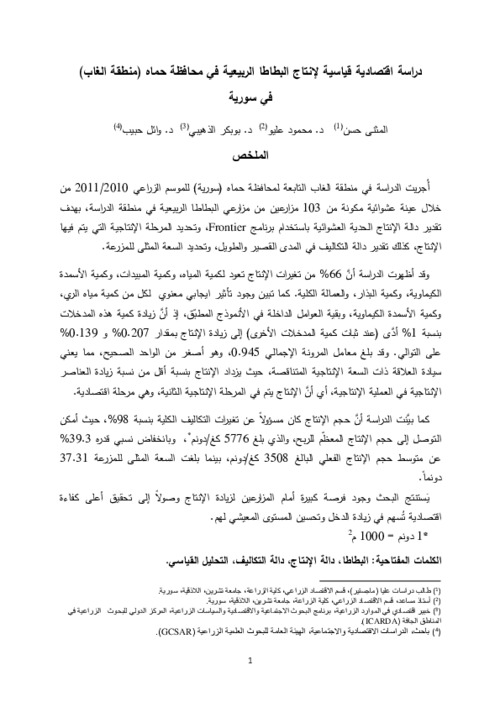 The present study was conducted in the province in AL Ghab region(Hama- Syria) during the 2010/2011 cropping season. A random sample of 103 farmers from spring potato farmers in the study area was used. The objective of the study is twofold: First, to identify the optimal productivity level of potato farmers. Second, to determine the optimum capacity of production at the farm level. The methodology used was based on the estimation of both stochastic frontier production and cost functions in the short and long time terms. The study showed that 66% of the production changes back to the amount of water, amount of pesticides, and amount of chemical fertilizers, amount of seed, and total workers. It shows also a significant positive impact for both the amount of irrigation water and chemical fertilizers on the production of spring potatoes. In fact, an increase amount of this input resulted in a 1% (keeping the remaining quantity of inputs constant) to increase production by 0.207% and 0.139%, respectively. The total flexibility coefficient reached 0.945, which is smaller than the right one, which means the rule of decreasing production capacity of the relationship, in terms of production, is increasing at rates lower than the increase on the production process. This confirms that production is in the second phase at its economic stage. Which shows the volume of production was responsible for the total cost changes by 98%. In fact, to reach a volume of holy production for profit, which amounted to 5776 Kg/Acres with a relative decrease of 39.3% from the average actual production of 3508 kg / acre. While, the optimum capacity of the farm that must be accessible will be around 37.31 Acres. Research Concludes the existence of a great opportunity for farmers to increase production and thus achieving higher economic efficiency contribute to increasing income and improving livelihood for them.