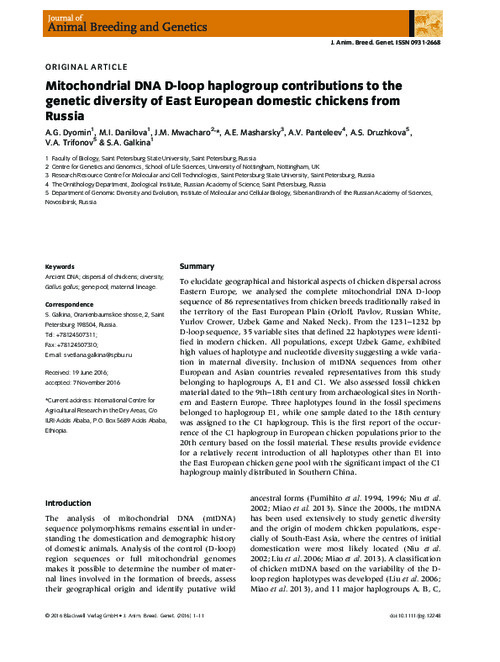 To elucidate geographical and historical aspects of chicken dispersal across Eastern Europe, we analysed the complete mitochondrial DNA D-loop sequence of 86 representatives from chicken breeds traditionally raised in the territory of the East European Plain (Orloff, Pavlov, Russian White, Yurlov Crower, Uzbek Game and Naked Neck). From the 1231–1232 bp D-loop sequence, 35 variable sites that defined 22 haplotypes were identified in modern chicken. All populations, except Uzbek Game, exhibited high values of haplotype and nucleotide diversity suggesting a wide variation in maternal diversity. Inclusion of mtDNA sequences from other European and Asian countries revealed representatives from this study belonging to haplogroups A, E1 and C1. We also assessed fossil chicken material dated to the 9th–18th century from archaeological sites in Northern and Eastern Europe. Three haplotypes found in the fossil specimens belonged to haplogroup E1, while one sample dated to the 18th century was assigned to the C1 haplogroup. This is the first report of the occur- rence of the C1 haplogroup in European chicken populations prior to the 20th century based on the fossil material. These results provide evidence for a relatively recent introduction of all haplotypes other than E1 into the East European chicken gene pool with the significant impact of the C1 haplogroup mainly distributed in Southern China.