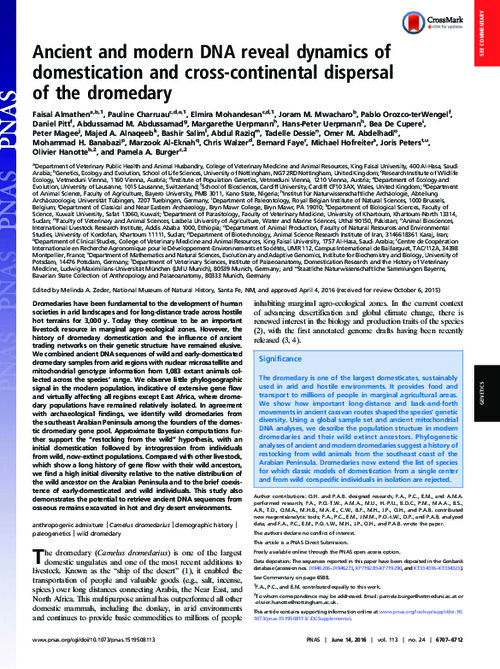 Dromedaries have been fundamental to the development of human societies in arid landscapes and for long-distance trade across hostile hot terrains for 3,000 y. Today they continue to be an important livestock resource in marginal agro-ecological zones. However, the history of dromedary domestication and the influence of ancient trading networks on their genetic structure have remained elusive. We combined ancient DNA sequences of wild and early-domesticated dromedary samples from arid regions with nuclear microsatellite and mitochondrial genotype information from 1,083 extant animals collected across the species’ range. We observe little phylogeographic signal in the modern population, indicative of extensive gene flow and virtually affecting all regions except East Africa, where dromedary populations have remained relatively isolated. In agreement with archaeological findings, we identify wild dromedaries from the southeast Arabian Peninsula among the founders of the domestic dromedary gene pool. Approximate Bayesian computations further support the “restocking from the wild” hypothesis, with an initial domestication followed by introgression from individuals from wild, now-extinct populations. Compared with other livestock, which show a long history of gene flow with their wild ancestors, we find a high initial diversity relative to the native distribution of the wild ancestor on the Arabian Peninsula and to the brief coexistence of early-domesticated and wild individuals. This study also demonstrates the potential to retrieve ancient DNA sequences from osseous remains excavated in hot and dry desert environments.