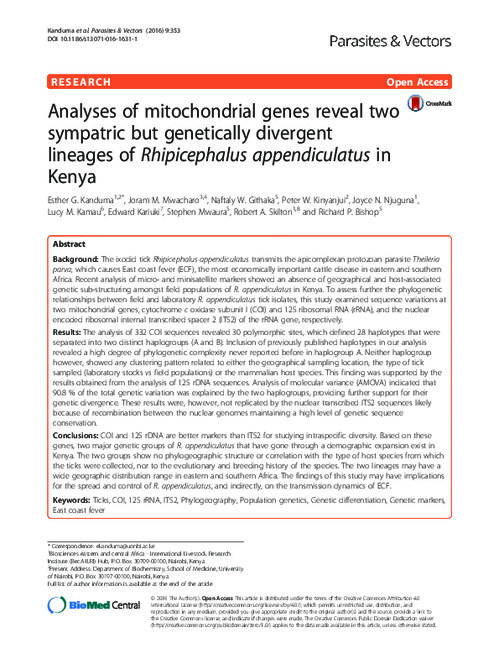 The ixodid tick Rhipicephalus appendiculatus transmits the apicomplexan protozoan parasite Theileria parva, which causes East coast fever (ECF), the most economically important cattle disease in eastern and southern Africa. Recent analysis of micro- and minisatellite markers showed an absence of geographical and host-associated genetic sub-structuring amongst field populations of R. appendiculatus in Kenya. To assess further the phylogenetic relationships between field and laboratory R. appendiculatus tick isolates, this study examined sequence variations at two mitochondrial genes, cytochrome c oxidase subunit I (COI) and 12S ribosomal RNA (rRNA), and the nuclear encoded ribosomal internal transcribed spacer 2 (ITS2) of the rRNA gene, respectively. The analysis of 332 COI sequences revealed 30 polymorphic sites, which defined 28 haplotypes that were separated into two distinct haplogroups (A and B). Inclusion of previously published haplotypes in our analysis revealed a high degree of phylogenetic complexity never reported before in haplogroup A. Neither haplogroup however, showed any clustering pattern related to either the geographical sampling location, the type of tick sampled (laboratory stocks vs field populations) or the mammalian host species. This finding was supported by the results obtained from the analysis of 12S rDNA sequences. Analysis of molecular variance (AMOVA) indicated that 90.8 % of the total genetic variation was explained by the two haplogroups, providing further support for their genetic divergence. These results were, however, not replicated by the nuclear transcribed ITS2 sequences likely because of recombination between the nuclear genomes maintaining a high level of genetic sequence conservation. COI and 12S rDNA are better markers than ITS2 for studying intraspecific diversity. Based on these genes, two major genetic groups of R. appendiculatus that have gone through a demographic expansion exist in Kenya. The two groups show no phylogeographic structure or correlation with the type of host species from which the ticks were collected, nor to the evolutionary and breeding history of the species. The two lineages may have a wide geographic distribution range in eastern and southern Africa. The findings of this study may have implications for the spread and control of R. appendiculatus, and indirectly, on the transmission dynamics of ECF.