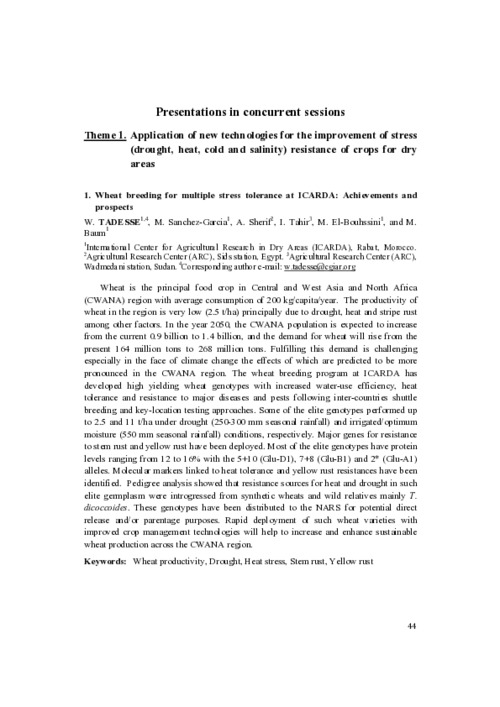 Wheat is the principal food crop in Central and West Asia and North Africa (CWANA) region with average consumption of 200 kg/capita/year. The productivity of wheat in the region is very low (2.5 t/ha) principally due to drought, heat and stripe rust among other factors. In the year 2050, the CWANA population is expected to increase from the current 0.9 billion to 1.4 billion, and the demand for wheat will rise from the present 164 million tons to 268 million tons. Fulfilling this demand is challenging especially in the face of climate change the effects of which are predicted to be more pronounced in the CWANA region. The wheat breeding program at ICARDA has developed high yielding wheat genotypes with increased water-use efficiency, heat tolerance and resistance to major diseases and pests following inter-countries shuttle breeding and key-location testing approaches. Some of the elite genotypes performed up to 2.5 and 11 t/ha under drought (250-300 mm seasonal rainfall) and irrigated/optimum moisture (550 mm seasonal rainfall) conditions, respectively. Major genes for resistance to stem rust and yellow rust have been deployed. Most of the elite genotypes have protein levels ranging from 12 to 16% with the 5+10 (Glu-D1), 7+8 (Glu-B1) and 2* (Glu-A1) alleles. Molecular markers linked to heat tolerance and yellow rust resistances have been identified. Pedigree analysis showed that resistance sources for heat and drought in such elite germplasm were introgressed from synthetic wheats and wild relatives mainly T. dicoccoides. These genotypes have been distributed to the NARS for potential direct release and/or parentage purposes. Rapid deployment of such wheat varieties with improved crop management technologies will help to increase and enhance sustainable wheat production across the CWANA region.