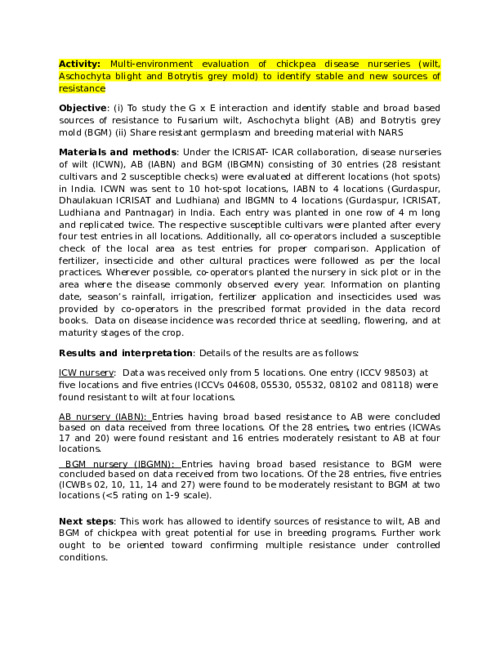 Under the ICRISAT- ICAR collaboration, disease nurseries of wilt (ICWN), AB (IABN) and BGM (IBGMN) consisting of 30 entries (28 resistant cultivars and 2 susceptible checks) were evaluated at different locations (hot spots) in India. ICWN was sent to 10 hot-spot locations, IABN to 4 locations (Gurdaspur, Dhaulakuan ICRISAT and Ludhiana) and IBGMN to 4 locations (Gurdaspur, ICRISAT, Ludhiana and Pantnagar) in India. Each entry was planted in one row of 4 m long and replicated twice. The respective susceptible cultivars were planted after every four test entries in all locations. Additionally, all co-operators included a susceptible check of the local area as test entries for proper comparison. Application of fertilizer, insecticide and other cultural practices were followed as per the local practices. Wherever possible, co-operators planted the nursery in sick plot or in the area where the disease commonly observed every year. Information on planting date, season’s rainfall, irrigation, fertilizer application and insecticides used was provided by co-operators in the prescribed format provided in the data record books. Data on disease incidence was recorded thrice at seedling, flowering, and at maturity stages of the crop.