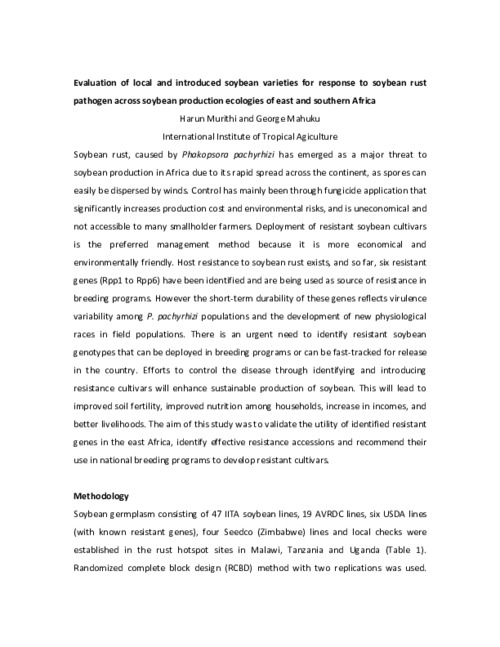 Soybean rust, caused by Phakopsora pachyrhizi has emerged as a major threat to soybean production in Africa due to its rapid spread across the continent, as spores can easily be dispersed by winds. Control has mainly been through fungicide application that significantly increases production cost and environmental risks, and is uneconomical and not accessible to many smallholder farmers. Deployment of resistant soybean cultivars is the preferred management method because it is more economical and environmentally friendly. Host resistance to soybean rust exists, and so far, six resistant genes (Rpp1 to Rpp6) have been identified and are being used as source of resistance in breeding programs. However the short-term durability of these genes reflects virulence variability among P. pachyrhizi populations and the development of new physiological races in field populations. There is an urgent need to identify resistant soybean genotypes that can be deployed in breeding programs or can be fast-tracked for release in the country. Efforts to control the disease through identifying and introducing resistance cultivars will enhance sustainable production of soybean. This will lead to improved soil fertility, improved nutrition among households, increase in incomes, and better livelihoods. The aim of this study was to validate the utility of identified resistant genes in the east Africa, identify effective resistance accessions and recommend their use in national breeding programs to develop resistant cultivars