Baseline survey of orange-fleshed sweet potato knowledge, farming and consumption, and dietary practices among households with children aged 6-59 months in selected districts of Morogoro, Iringa and Mbeya regions of Tanzania 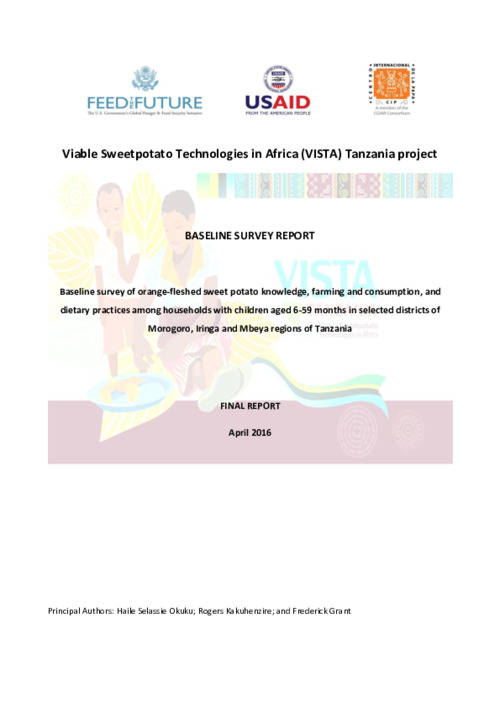 Orange-fleshed sweetpotato (OFSP) as a staple food besides providing necessary body energy in human diet provides significant amounts of Vitamin A addressing both Vitamin A deficiency (VAD) and body energy needs. The Viable Sweetpotato Technologies in Africa (VISTA) – Tanzania project is designed to expand the production and utilization of nutritious OFSP into seven districts in Mbeya, Iringa and Morogoro regions which are part of USAID’s Feed the Future (FTF) zones of influence (ZOI). As part of initial project activities, a baseline survey was implemented to provide a better understanding of the prevailing OFSP knowledge, farming and consumption and dietary practices of caregivers of households with children aged between 6 and 59 months in the project intervention districts. This will provide up-to-date data on key indicators to better understand the context and to be able to use these as a basis for progress monitoring over the three year project period