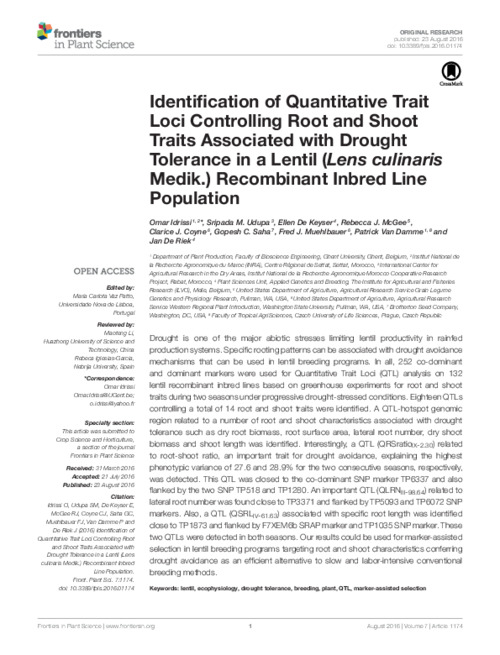 Drought is one of the major abiotic stresses limiting lentil productivity in rainfed production systems. Specific rooting patterns can be associated with drought avoidance mechanisms that can be used in lentil breeding programs. In all, 252 co-dominant and dominant markers were used for Quantitative Trait Loci (QTL) analysis on 132 lentil recombinant inbred lines based on greenhouse experiments for root and shoot traits during two seasons under progressive drought-stressed conditions. Eighteen QTLs controlling a total of 14 root and shoot traits were identified. A QTL-hotspot genomic region related to a number of root and shoot characteristics associated with drought tolerance such as dry root biomass, root surface area, lateral root number, dry shoot biomass and shoot length was identified. Interestingly, a QTL (QRSratioIX-2.30) related to root-shoot ratio, an important trait for drought avoidance, explaining the highest phenotypic variance of 27.6 and 28.9% for the two consecutive seasons, respectively, was detected. This QTL was closed to the co-dominant SNP marker TP6337 and also flanked by the two SNP TP518 and TP1280. An important QTL (QLRNIII-98.64) related to lateral root number was found close to TP3371 and flanked by TP5093 and TP6072 SNP markers. Also, a QTL (QSRLIV-61.63) associated with specific root length was identified close to TP1873 and flanked by F7XEM6b SRAP marker and TP1035 SNP marker. These two QTLs were detected in both seasons. Our results could be used for marker-assisted selection in lentil breeding programs targeting root and shoot characteristics conferring drought avoidance as an efficient alternative to slow and labor-intensive conventional breeding methods.