Climate Change, Gender, Decision-making Power, and Migration into the Saiss Region of Morocco 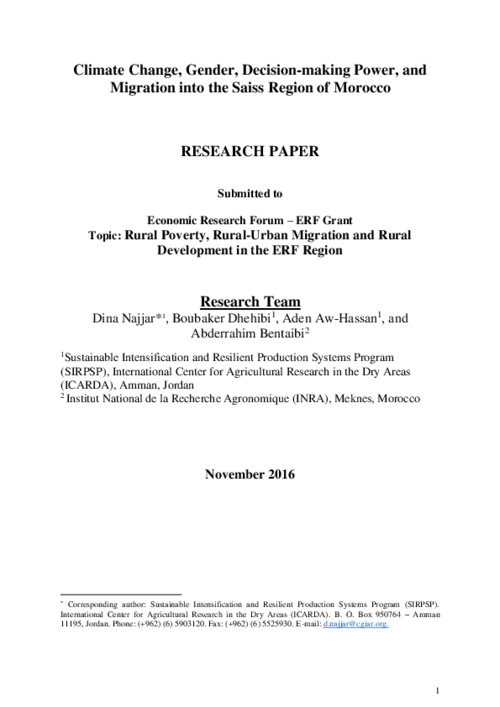 Studies on migration in the Middle East and North Africa (MENA) region have so far focused on migration to urban areas (local cities and European countries). Little research has explored internal migration into rural areas. Yet in Morocco rural-rural migration is an important strategy for many who are escaping climate variability and unemployment in their hometowns to take advantage of labour opportunities in thriving agricultural enterprises. Gender remains largely missing from migration research in Morocco especially for migrant women. Gender differences are important to account for as men and women have diverse motives, strategies and experiences with migration, and thus require different interventions. In light of gender differences and climate-induced migration and investments in irrigation, this research follows up on the ground to understand the experiences of men and women labourers as the migration continues in three rural areas in the Saiss region (Morocco). These are chosen based on differences in socio-economic, gender norms, and biophysical dynamics to capture as diverse experiences as possible with labour work and migration as possible. These areas also represent both sending and receiving communities. Data was collected through a survey administered to 400 labourers (179 women and 221 men) employed in the intensified agricultural sector of Saiss in Morocco. Using gender analysis, logistic regression models framework and political ecology approach, our findings emphasize that men should be sensitized in their attainment of tertiary education on gender equality and the importance soliciting women’s participation in decision-making, particularly with regards to assets (house). For the economic advancement of women, there should be a sustained focus on their ownership and control over unalienable assets (such as housing). The same recommendation applies to the youth. Finally, we found that migrants were less likely to control houses that they owned probably due to a general lack of title deeds. We recommend formalizing their ownership of housing in the settlement areas.