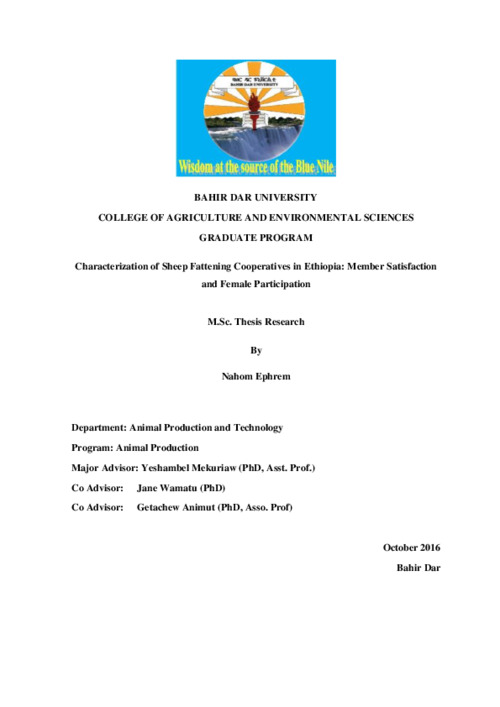 Cooperatives play crucial roles in economic and social development of both men and women. The study was conducted to determine the participation of sheep farmers in sheep fattening cooperatives (SFC) in four regional states of Ethiopia with a special focus on women. Variables studied included characteristics of members, length of membership (LM), extent of participation in decision making (EPDM), satisfaction of the level of management (SLM), interaction with cooperative officials (ICO), interaction with members (ICM), satisfaction level on interaction (SLI), members taken into consideration (MTC), annual revenue of the cooperative (ARC), share of meetings attended (SMA), Fifty four legally registered SFC were selected purposively based on their current status and their accessibility. Probability proportionate to size (PPS) technique was used to determine the number of producer members to be studied. A total of 314 members and 54 chairpersons of the cooperatives were interviewed using structured questionnaires. Descriptive statistics (mean, percentage and frequency) and econometric model (tobit and logit) were employed for data analysis using Statistical Analytic Software (SAS) ver. 9.2. Results showed that the majority (69.7%) of members in SFC were men. The SFC in this study showed no trend of increasing membership. Members (53.8) participated moderately in decision making, while 38% had a moderate level of satisfaction in the management. There were high levels of interaction as shown by proportions of producer members who interacted with officials (58.8%) and among themselves (60.4). The proportion of members who attended all cooperative meetings was 30.6%. There were no correlations between age of members and length of membership with other variables. EPDM was strongly correlated (P<0.01) with SLM, ICM, SLI, MTC, ARC and SMA but not correlated (P>0.05) with ICO. From the result of this study, majority (68.9%) of respondent members have no intention of increasing the number of sheep per fattening cycle. Poor market linkage and information, feed, cash and space ranked 1st, 2nd, 3rd and 4th as factor that limit the number of fattening sheep per cycle. Internal factors were mentioned to have a strong influence on the future existence of SFC as compared to external factors. There was a significantly higher (P< 0.05) proportion of women membership in SFC initiated by NGOs and cooperatives that have women in the leadership positions. There was significantly lower (P<0.001) proportions of women in SFC whereby members buy shares at the start-up. The level of literacy had an effect on women's participation in leadership. Women had a higher chance of being leaders in SFC that were women-based, those with higher proportions of female membership, and those with leaders who have undertaken gender-related training courses. Membership in SFC resulted in improved women's access and control over inputs and resources, training and credit, and participation in decision making and management activities. However, their proportion and participation in leadership of SFC is still limited. Therefore, awareness creation and gender inclusive trainings, access to resources and education should be done and improved in order to involve women effectively in cooperative development.