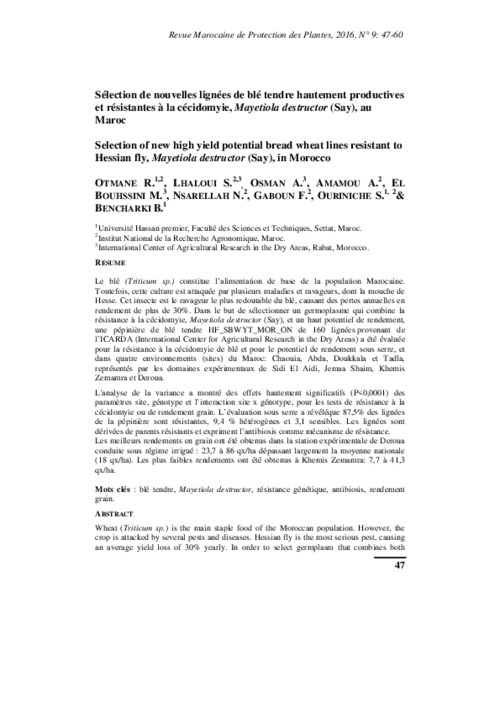 Wheat (Triticum sp.) is the main staple food of the Moroccan population. However, the crop is attacked by several pests and diseases. Hessian fly is the most serious pest, causing an average yield loss of 30% yearly. In order to select germplasm that combines both Hessian fly resistance and a high yield potential, an ICARDA bread wheat nursery, HF_SPWYT_MOR_ON of 160 lines, was evaluated for resistance to Hessian fly and for yield potential under greenhouse and in four Moroccan environments: Chaouia, Abda, Doukkala and Tadla, represented by the experimental domains of Sidi El Aidi, Jemaa Shaim, Khemis Zemamra and Deroua. Analysis of variance showed highly significant effects (P<0.0001) ofsite, genotype and their interactions (sitex genotype). The evaluation under greenhouse conditions showed that 87.5% of the nursery was resistant, 9.4% heterogeneous and 3.1% was susceptible. Most of the lines were resistant in the field. These lines are derived from resistant parents, and express antibiosisas a mechanismof resistance. The best grain yields were obtained in the experimental domain of Deroua, 23.7 to 86 q/ha, which is much higher than the national average (18 qls/ha).The lowest were obtained in Khemis Zemamra, 7.7 to 41.3qls / ha.