Understanding trends and patterns of production, consumption and trade of pulses within Middle East-North Africa (MENA): implications for research, development and policy within the region 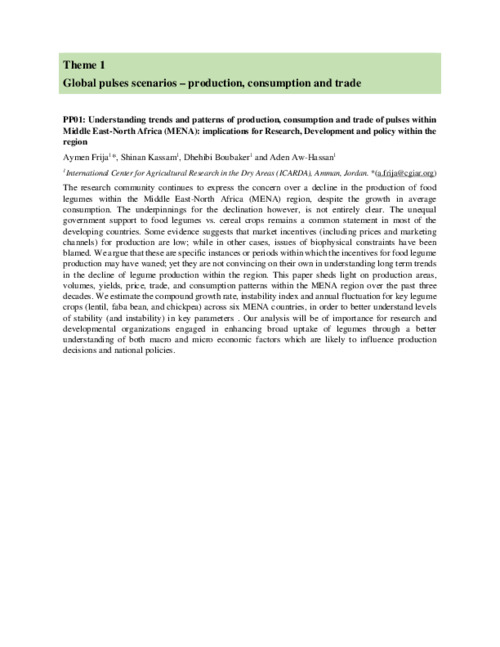 The research community continues to express the concern over a decline in the production of food legumes within the Middle East-North Africa (MENA) region, despite the growth in average consumption. The underpinnings for the declination however, is not entirely clear. The unequal government support to food legumes vs. cereal crops remains a common statement in most of the developing countries. Some evidence suggests that market incentives (including prices and marketing channels) for production are low; while in other cases, issues of biophysical constraints have been blamed. We argue that these are specific instances or periods within which the incentives for food legume production may have waned; yet they are not convincing on their own in understanding long term trends in the decline of legume production within the region. This paper sheds light on production areas, volumes, yields, price, trade, and consumption patterns within the MENA region over the past three decades. We estimate the compound growth rate, instability index and annual fluctuation for key legume crops (lentil, faba bean, and chickpea) across six MENA countries, in order to better understand levels of stability (and instability) in key parameters. Our analysis will be of importance for research and developmental organizations engaged in enhancing broad uptake of legumes through a better understanding of both macro and micro economic factors which are likely to influence production decisions and national policies.