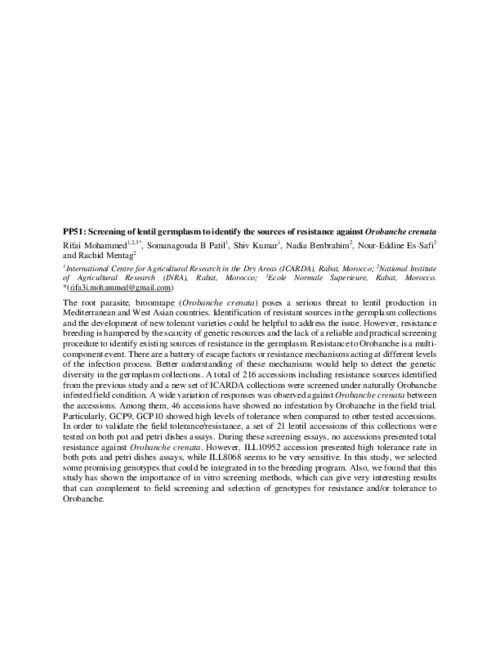 The root parasite, broomrape (Orobanche crenata) poses a serious threat to lentil production in Mediterranean and West Asian countries. Identinfication of resistant sources in the germplasm collections and the development of new tolerant varieties could be helpful to address the issue. However, resistance breeding is hampered by the scarcity of genetic resources and the lack of a reliable and practical screening procedure to identify existing sources of resistance in the germplasm. Resistance to Orobanche is a multi-component event. There are a battery of escape factors or resistance mechanisms acting at different levels of the infection process. Better understanding of these mechanisms would help to detect the genetic diversity in the germplasm collections. A total of 216 accessions including resistance sources identified from the previous study and a new set of ICARDA collections were screened under naturally Orobanche infested field condition. A wide variation of responses was observed against Orobanche crenata between the accessions. Among them, 46 accessions have showed no infestation by Orobanche in the field trial. Particularly, GCP9, GCP10 showed high levels of tolerance when compared to other tested accessions. In order to validate the field tolerance/resistance, a set of 21 lentil accessions of this collections were tested on both pot and petri dishes assays. During these screening essays, no accessions presented total resistance against Orobanche crenata. However, ILL10952 accession presented high tolerance rate in both pots and petri dishes assays, while ILL8068 seems to be very sensitive. In this study, we selected some promising genotypes that could be integrated in to the breeding program. Also, we found that this study has shown the importance of in vitro screening methods, which can give very interesting results that can complement to field screening and selection of genotypes for resistance and/or tolerance to Orobanche.