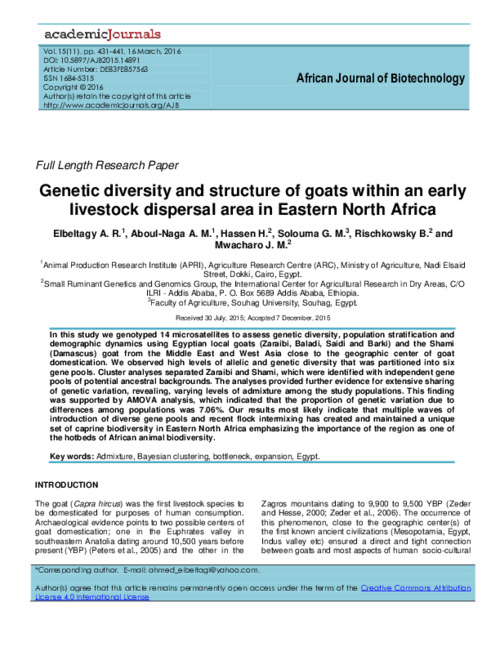 In this study we genotyped 14 microsatellites to assess genetic diversity, population stratification and demographic dynamics using Egyptian local goats (Zaraibi, Baladi, Saidi and Barki) and the Shami (Damascus) goat from the Middle East and West Asia close to the geographic center of goat domestication. We observed high levels of allelic and genetic diversity that was partitioned into six gene pools. Cluster analyses separated Zaraibi and Shami, which were identified with independent gene pools of potential ancestral backgrounds. The analyses provided further evidence for extensive sharing of genetic variation, revealing, varying levels of admixture among the study populations. This finding was supported by AMOVA analysis, which indicated that the proportion of genetic variation due to differences among populations was 7.06%. Our results most likely indicate that multiple waves of introduction of diverse gene pools and recent flock intermixing has created and maintained a unique set of caprine biodiversity in Eastern North Africa emphasizing the importance of the region as one of the hotbeds of African animal biodiversity.