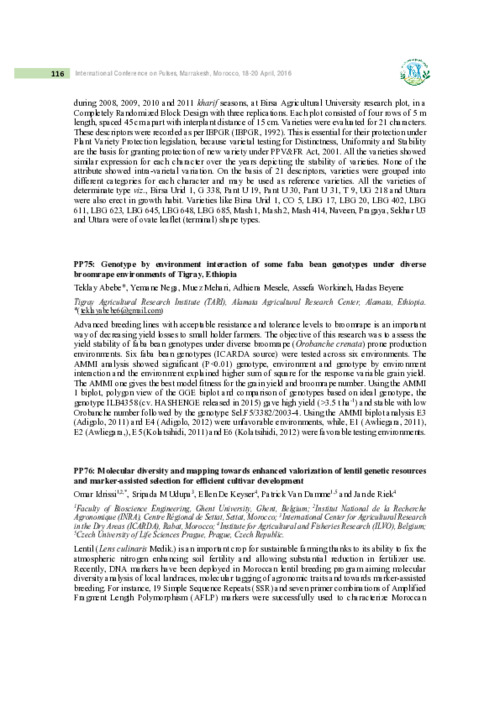 Lentil (Lens culinaris Medik.) is an important crop for sustainable farming thanks to its ability to fix the atmospheric nitrogen enhancing soil fertility and allowing substantial reduction in fertilizer use. Recently, DNA markers have been deployed in Moroccan lentil breeding program aiming molecular diversity analysis of local landraces, molecular tagging of agronomic traits and towards marker-assisted breeding. For instance, 19 Simple Sequence Repeats (SSR) and seven primer combinations of Amplified Fragment Length Polymorphism (AFLP) markers were successfully used to characterize Moroccan landraces of lentil. Genetic differentiation according to agro-environmental origins (dry areas, highlands and favourable areas) was demonstrated allowing oriented selection of genotypes to be included in breeding programs. Landraces from dry areas especially those originating from Jemaat Shaim would result in greater genetic gain for drought tolerance, while landraces from highlands (middle Atlas mountains) would result in greater genetic gain for cold tolerance. Furthermore, genetic evidence for the differentiation of ‘lentils of Ain Sbit’ as a local product quality mark (produit de terroir) were obtained, thus offering efficient tools for enhanced valorization and for the protection of this landrace for the benefits of local farmers. Also, a number of SSR and AFLP alleles that were identified to be linked with drought tolerance could differentiate landraces according to their response to drought stress. These alleles could be used in marker-trait association studies. On the other hand, important molecular markers including Single Nucleotide Polymorphism (SNP) were identified to be associated with quantitative trait loci related to root and shoot traits conferring drought tolerance in a recombinant inbred line population. Also the previously developed genetic linkage map related to this population was enhanced using a combination of co-dominant and dominant markers. The use of the identified DNA markers in the lentil breeding program would result in a more efficient cultivar development and enhanced valorization of genetic resources.