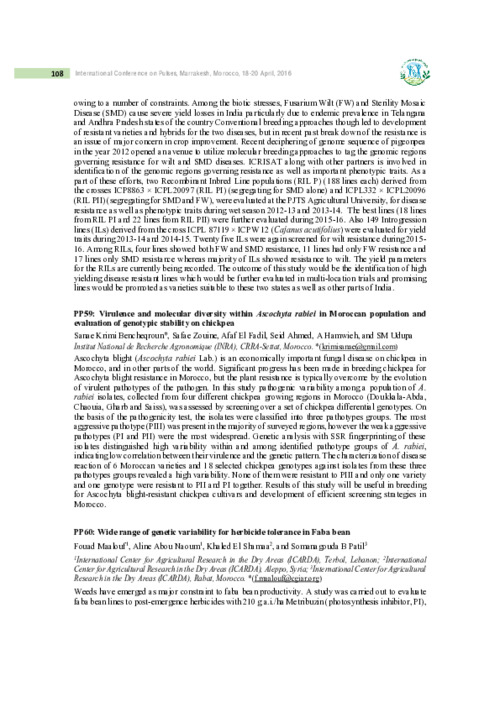 Ascochyta blight (Ascochyta rabiei Lab.) is an economically important fungal disease on chickpea in Morocco, and in other parts of the world. Significant progress has been made in breeding chickpea for Ascochyta blight resistance in Morocco, but the plant resistance is typically overcome by the evolution of virulent pathotypes of the pathogen. In this study pathogenic variability among a population of A. rabiei isolates, collected from four different chickpea growing regions in Morocco (Doukkala-Abda, Chaouia, Gharb and Saiss), was assessed by screening over a set of chickpea differential genotypes. On the basis of the pathogenicity test, the isolates were classified into three pathotypes groups. The most aggressive pathotype (PIII) was present in the majority of surveyed regions, however the weak aggressive pathotypes (PI and PII) were the most widespread. Genetic analysis with SSR fingerprinting of these isolates distinguished high variability within and among identified pathotype groups of A. rabiei, indicating low correlation between their virulence and the genetic pattern. The characterization of disease reaction of 6 Moroccan varieties and 18 selected chickpea genotypes against isolates from these three pathotypes groups revealed a high variability. None of them were resistant to PIII and only one variety and one genotype were resistant to PII and PI together. Results of this study will be useful in breeding for Ascochyta blight-resistant chickpea cultivars and development of efficient screening strategies in Morocco.