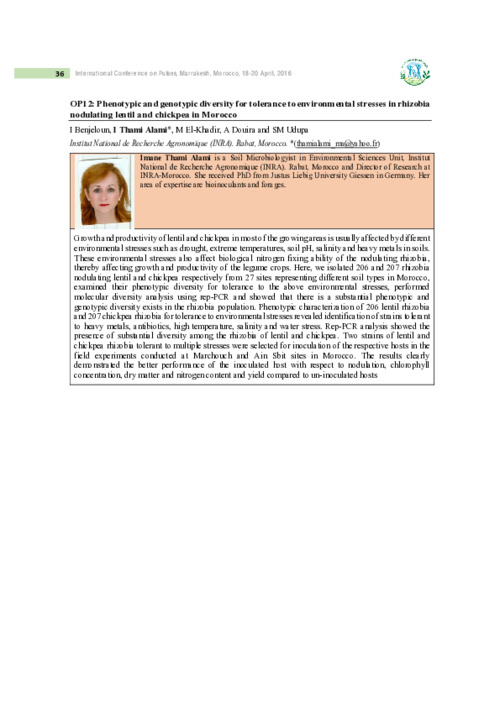 Growth and productivity of lentil and chickpea in most of the growing areas is usually affected by different environmental stresses such as drought, extreme temperatures, soil pH, salinity and heavy metals in soils. These environmental stresses also affect biological nitrogen fixing ability of the nodulating rhizobia, thereby affecting growth and productivity of the legume crops. Here, we isolated 206 and 207 rhizobia nodulating lentil and chickpea respectively from 27 sites representing different soil types in Morocco, examined their phenotypic diversity for tolerance to the above environmental stresses, performed molecular diversity analysis using rep-PCR and showed that there is a substantial phenotypic and genotypic diversity exists in the rhizobia population. Phenotypic characterization of 206 lentil rhizobia and 207 chickpea rhizobia for tolerance to environmental stresses revealed identification of strains tolerant to heavy metals, antibiotics, high temperature, salinity and water stress. Rep-PCR analysis showed the presence of substantial diversity among the rhizobia of lentil and chickpea. Two strains of lentil and chickpea rhizobia tolerant to multiple stresses were selected for inoculation of the respective hosts in the field experiments conducted at Marchouch and Ain Sbit sites in Morocco. The results clearly demonstrated the better performance of the inoculated host with respect to nodulation, chlorophyll concentration, dry matter and nitrogen content and yield compared to un-inoculated hosts.