Variation in the straw traits of morphological fractions of faba bean (Vicia faba L.) and implications for selecting for food-feed varieties 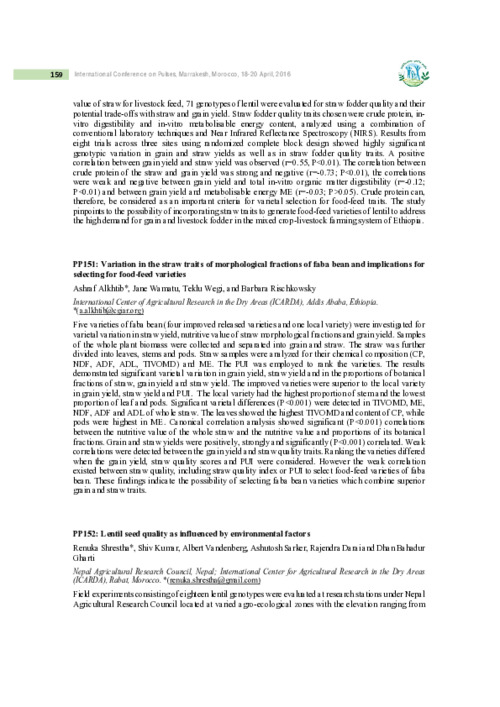 Five varieties of faba bean (four improved released varieties and one local variety) were investigated for varietal variation in straw yield, nutritive value of straw morphological fractions and grain yield. Samples of the whole plant biomass were collected and separated into grain and straw. The straw was further divided into leaves, stems and pods. Straw samples were analyzed for their chemical composition (CP, NDF, ADF, ADL, TIVOMD) and ME. The PUI was employed to rank the varieties. The results demonstrated significant varietal variation in grain yield, straw yield and in the proportions of botanical fractions of straw, grain yield and straw yield. The improved varieties were superior to the local variety in grain yield, straw yield and PUI. The local variety had the highest proportion of stem and the lowest proportion of leaf and pods. Significant varietal differences (P<0.001) were detected in TIVOMD, ME, NDF, ADF and ADL of whole straw. The leaves showed the highest TIVOMD and content of CP, while pods were highest in ME. Canonical correlation analysis showed significant (P<0.001) correlations between the nutritive value of the whole straw and the nutritive value and proportions of its botanical fractions. Grain and straw yields were positively, strongly and significantly (P<0.001) correlated. Weak correlations were detected between the grain yield and straw quality traits. Ranking the varieties differed when the grain yield, straw quality scores and PUI were considered. However the weak correlation existed between straw quality, including straw quality index or PUI to select food-feed varieties of faba bean. These findings indicate the possibility of selecting faba bean varieties which combine superior grain and straw traits.