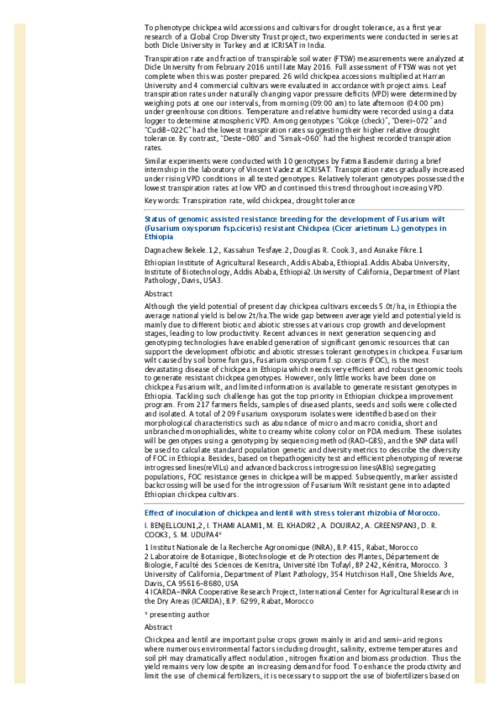 Sripada M. Udupa. (7/8/2016). Effect of inoculation of chickpea and lentil with stress tolerant rhizobia of Morocco. Sacramento, United States: The Regents of the University of California.

Chickpea and lentil are important pulse crops grown mainly in arid and semi-arid regions where numerous environmental factors including drought, salinity, extreme temperatures and soil pH may dramatically affect nodulation, nitrogen fixation and biomass production. Thus the yield remains very low despite an increasing demand for food. To enhance the productivity and limit the use of chemical fertilizers, it is necessary to support the use of biofertilizers based on          stress-tolerant microorganisms for an economic and ecologically- sustainable agriculture. The aim of this study is to characterize populations of rhizobia nodulating lentil and chickpea in order to select the most tolerant and effective ones for use as inocula by farmers. To achieve this objective 207 and 206 isolates were purified from chickpea and lentil nodules respectively. Isolates were characterized using rep-PCR which showed the presence of 23 groups among lentil rhizobia and 40 groups for chickpea rhizobia. Examination for their tolerance to environmental stresses (pH, salinity, water stress, and extreme temperatures) revealed large phenotypic variability for these conditions. Two highly efficient and tolerant strains were selected for each crop for a field inoculation test. The experiment was carried out at two sites in Morocco, Merchouch (clay-silty) and Ain Sbit ( clay-sandy) in a Randomized Complete Block Design (RCBD) design, with four treatments: Control (no inoculation and no N application), S1 (inoculation with strain 1) and S2 (inoculation with strain 2) and N fertilization (N 120kg/ha), each with four replications.