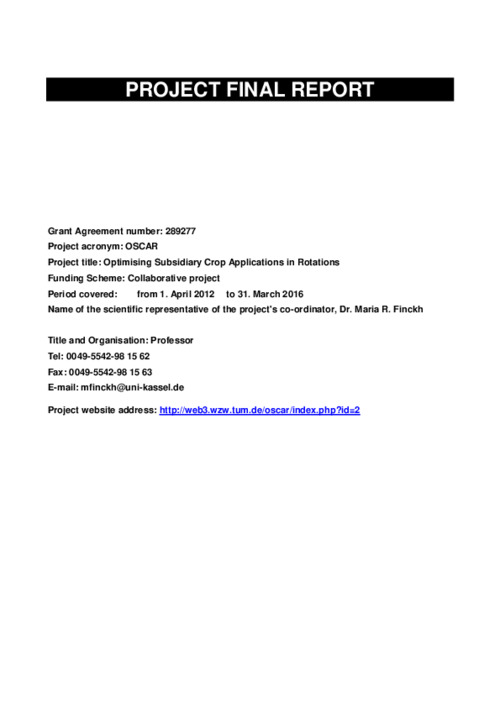 The overall objective of the project OSCAR was to be of use for, and improve sustainability in low- input, organic, and conventional farming systems. The research built on centrally planned multi- environment and long-term experiments on of living mulch (LM) and cover crop (CC) based reduced tillage systems and detailed research on system management optimization, technology improvement, soil ecological services, and dissemination. LMs can benefit both organic and extensive conventional farming in Europe. For successful LM based cropping high crop densities are needed and regular sowing patterns were best suited. If expected cereal yields ≤ 6 t ha-1, a clover LM canopy sufficiently strong to generate a dense sward after main crop harvest can establish in temperate and north Mediterranean environments with mild winters and no water limitation of wheat productivity. In cooler places sowing the LM before the main crop or undersowing in spring can be solutions. High biomass producing CCs can compensate typical negative initial effects of reduced tillage (RT) with respect to yield and weeds. Especially further north, where the growing season is shorter, it is necessary to develop new methods for weed control in spring and autumn. Mechanical tools for subsidiary crop suppression, such as the roller-crimper, work best during flowering of the CCs. Over the long-term RT either was neutral or led to positive effects on yields and weeds especially in the sub-tropical climates in southern Brazil. Increased aggregate stability, higher soil C contents, higher microbial activity, and increase of arbuscular mycorrhizal fungi (AMF) survival were apparent after only one year of RT compared to conventional tillage (CT). AMF contribution to soil P uptake was greater in RT than CT and amounted to up to 30%. Appropriate CCs can sustain AMF during fallow periods and for improved colonization of subsequent crops. Nitrate leaching only played a role under north Mediterranean conditions or when in addition to SCs nitrogen fertilizer was also applied. RT, LM, and CC based systems either resulted in improvements or no changes in subsequent plant health also if the LM were leguminous plants. Potato late blight was significantly reduced in Germany and Brazil in RT combined with dead mulch. Laboratory and greenhouse trials confirmed the potential of volatile and water soluble compounds form R. sativus roots to reduce hyphal growth of both Fusarium graminearum and F. culmorum and the potential of compost to suppress foot and root rot diseases of peas, depending on compost type, age, and pathosystem. The modular structure of the WEco-Dyn machines allows a wide range of applications, from clean soil tillage to prepare a seedbed up to minimum and no-tillage systems combined with direct sowing but in-depth technological support and training for farmers willing to change to RT is needed. Rhizome-root fragmentation is a less intensive control method for perennial weeds compared to soil tillage and should be combined strategically with other preventive measures. New legume and non- leguminous CC species of interest were identified for selection and breeding. Resistant accessions of different species in several genera were identified in the OSCAR project and represent valuable genetic material for future breeding programs for small grain legumes. Economic modeling resulted in a wide range of potential outcomes of RT and SC based cropping systems in the short term and clear advantages in the long term. The methodology used will be able to integrate the long-term effects of soil fertility as factors of sustainability of reduced tillage and subsidiary cropping systems. Subsidiary crop application is essential for no-tillage systems to be sustainable. and is possible under a wide range of conditions, for LM as well as for CCs. RT combined with enhanced use of subsidiary crops and appropriate field technology has a high potential for improving efficiency of the cropping system, reducing resource use and increasing overall sustainability. Making the knowledge available to the public with the Cover Crop and Living Mulch Toolbox was a major step in supporting farmers in choosing species of LM or CC appropriate to their regions and systems and for encouraging others to contribute more to this important collective effort.