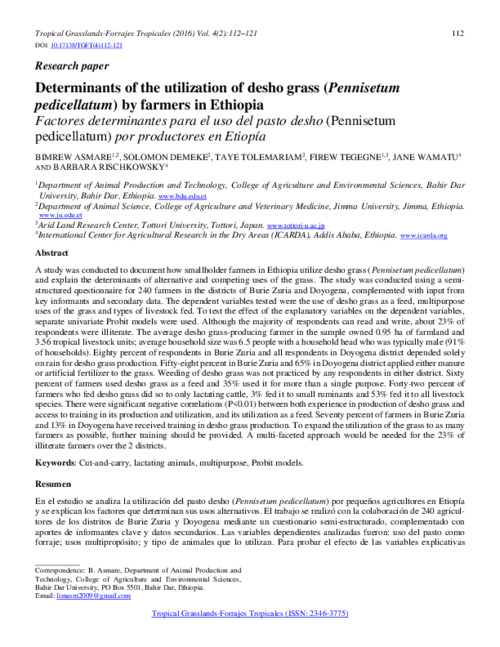 A study was conducted to document how smallholder farmers in Ethiopia utilize desho grass (Pennisetum pedicellatum) and explain the determinants of alternative and competing uses of the grass. The study was conducted using a semi- structured questionnaire for 240 farmers in the districts of Burie Zuria and Doyogena, complemented with input from key informants and secondary data. The dependent variables tested were the use of desho grass as a feed, multipurpose uses of the grass and types of livestock fed. To test the effect of the explanatory variables on the dependent variables, separate univariate Probit models were used. Although the majority of respondents can read and write, about 23% of respondents were illiterate. The average desho grass-producing farmer in the sample owned 0.95 ha of farmland and 3.56 tropical livestock units; average household size was 6.5 people with a household head who was typically male (91% of households). Eighty percent of respondents in Burie Zuria and all respondents in Doyogena district depended solely on rain for desho grass production. Fifty-eight percent in Burie Zuria and 65% in Doyogena district applied either manure or artificial fertilizer to the grass. Weeding of desho grass was not practiced by any respondents in either district. Sixty percent of farmers used desho grass as a feed and 35% used it for more than a single purpose. Forty-two percent of farmers who fed desho grass did so to only lactating cattle, 3% fed it to small ruminants and 53% fed it to all livestock species. There were significant negative correlations (P<0.01) between both experience in production of desho grass and access to training in its production and utilization, and its utilization as a feed. Seventy percent of farmers in Burie Zuria and 13% in Doyogena have received training in desho grass production. To expand the utilization of the grass to as many farmers as possible, further training should be provided. A multi-faceted approach would be needed for the 23% of illiterate farmers over the 2 districts.