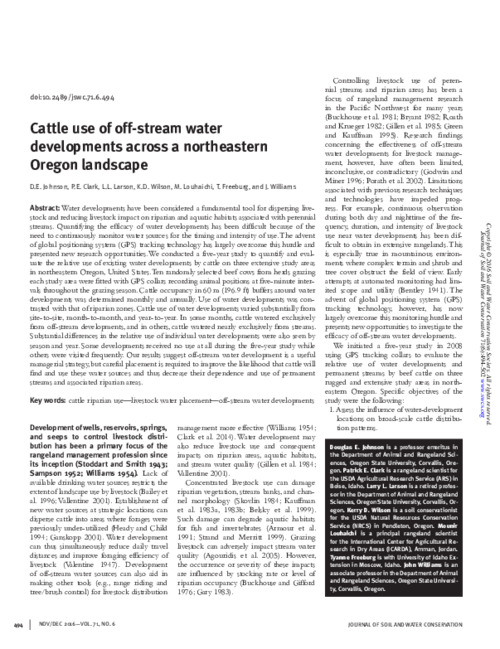 Water developments have been considered a fundamental tool for dispersing livestock and reducing livestock impact on riparian and aquatic habitats associated with perennial streams. Quantifying the efficacy of water developments has been difficult because of the need to continuously monitor water sources for the timing and intensity of use.The advent of global positioning system (GPS) tracking technology has largely overcome this hurdle and presented new research opportunities.We conducted a five-year study to quantify and evaluate the relative use of existing water developments by cattle on three extensive study areas in northeastern Oregon, United States. Ten randomly selected beef cows from herds grazing each study area were fitted with GPS collars recording animal positions at five-minute intervals throughout the grazing season. Cattle occupancy in 60 m (196.9 ft) buffers around water developments was determined monthly and annually. Use of water developments was contrasted with that of riparian zones. Cattle use of water developments varied substantially from site-to-site, month-to-month, and year-to-year. In some months, cattle watered exclusively from off-stream developments, and in others, cattle watered nearly exclusively from streams. Substantial differences in the relative use of individual water developments were also seen by season and year. Some developments received no use at all during the five-year study while others were visited frequently. Our results suggest off-stream water development is a useful managerial strategy, but careful placement is required to improve the likelihood that cattle will find and use these water sources and thus decrease their dependence and use of permanent streams and associated riparian areas.