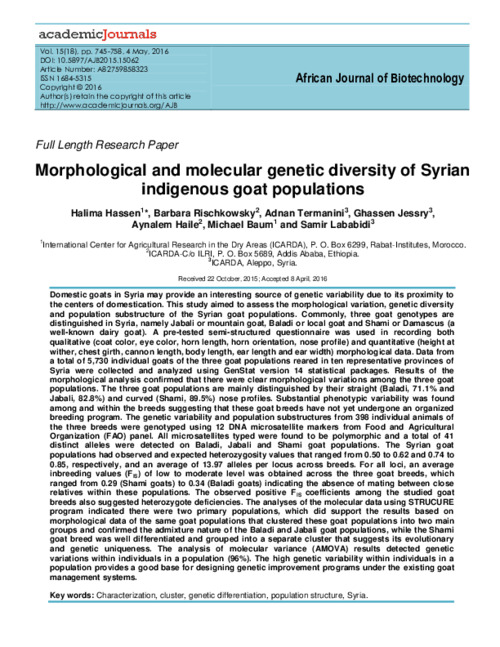 Domestic goats in Syria may provide an interesting source of genetic variability due to its proximity to the centers of domestication. This study aimed to assess the morphological variation, genetic diversity and population substructure of the Syrian goat populations. Commonly, three goat genotypes are distinguished in Syria, namely Jabali or mountain goat, Baladi or local goat and Shami or Damascus (a well-known dairy goat). A pre-tested semi-structured questionnaire was used in recording both qualitative (coat color, eye color, horn length, horn orientation, nose profile) and quantitative (height at wither, chest girth, cannon length, body length, ear length and ear width) morphological data. Data from a total of 5,730 individual goats of the three goat populations reared in ten representative provinces of Syria were collected and analyzed using GenStat version 14 statistical packages. Results of the morphological analysis confirmed that there were clear morphological variations among the three goat populations. The three goat populations are mainly distinguished by their straight (Baladi, 71.1% and Jabali, 82.8%) and curved (Shami, 89.5%) nose profiles. Substantial phenotypic variability was found among and within the breeds suggesting that these goat breeds have not yet undergone an organized breeding program. The genetic variability and population substructures from 398 individual animals of the three breeds were genotyped using 12 DNA microsatellite markers from Food and Agricultural Organization (FAO) panel. All microsatellites typed were found to be polymorphic and a total of 41 distinct alleles were detected on Baladi, Jabali and Shami goat populations. The Syrian goat populations had observed and expected heterozygosity values that ranged from 0.50 to 0.62 and 0.74 to 0.85, respectively, and an average of 13.97 alleles per locus across breeds. For all loci, an average inbreeding values (FIS) of low to moderate level was obtained across the three goat breeds, which ranged from 0.29 (Shami goats) to 0.34 (Baladi goats) indicating the absence of mating between close relatives within these populations. The observed positive FIS coefficients among the studied goat breeds also suggested heterozygote deficiencies. The analyses of the molecular data using STRUCURE program indicated there were two primary populations, which did support the results based on morphological data of the same goat populations that clustered these goat populations into two main groups and confirmed the admixture nature of the Baladi and Jabali goat populations, while the Shami goat breed was well differentiated and grouped into a separate cluster that suggests its evolutionary and genetic uniqueness. The analysis of molecular variance (AMOVA) results detected genetic variations within individuals in a population (96%). The high genetic variability within individuals in a population provides a good base for designing genetic improvement programs under the existing goat management systems.