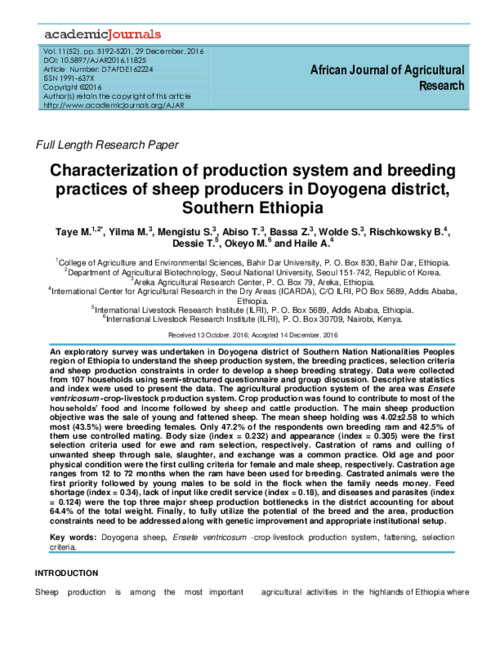 An exploratory survey was undertaken in Doyogena district of Southern Nation Nationalities Peoples region of Ethiopia to understand the sheep production system, the breeding practices, selection criteria and sheep production constraints in order to develop a sheep breeding strategy. Data were collected from 107 households using semi-structured questionnaire and group discussion. Descriptive statistics and index were used to present the data. The agricultural production system of the area was Ensete ventricosum -crop-livestock production system. Crop production was found to contribute to most of the households’ food and income followed by sheep and cattle production. The main sheep production objective was the sale of young and fattened sheep. The mean sheep holding was 4.02±2.58 to which most (43.5%) were breeding females. Only 47.2% of the respondents own breeding ram and 42.5% of them use controlled mating. Body size (index = 0.232) and appearance (index = 0.305) were the first selection criteria used for ewe and ram selection, respectively. Castration of rams and culling of unwanted sheep through sale, slaughter, and exchange was a common practice. Old age and poor physical condition were the first culling criteria for female and male sheep, respectively. Castration age ranges from 12 to 72 months when the ram have been used for breeding. Castrated animals were the first priority followed by young males to be sold in the flock when the family needs money. Feed shortage (index = 0.34), lack of input like credit service (index = 0.18), and diseases and parasites (index = 0.124) were the top three major sheep production bottlenecks in the district accounting for about 64.4% of the total weight. Finally, to fully utilize the potential of the breed and the area, production constraints need to be addressed along with genetic improvement and appropriate institutional setup.