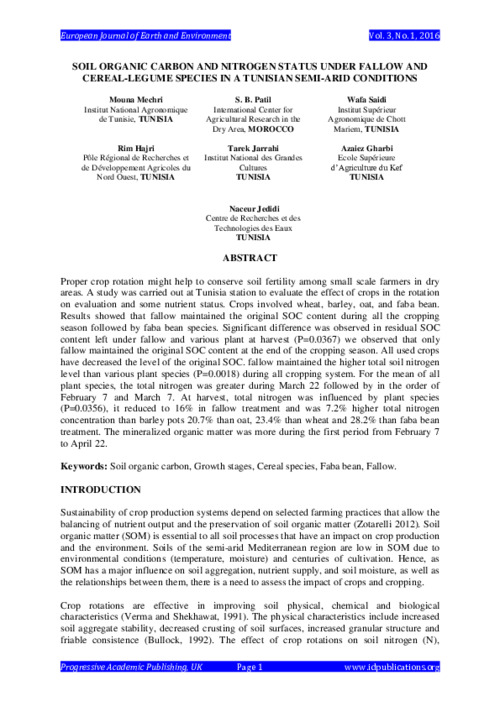 Proper crop rotation might help to conserve soil fertility among small scale farmers in dry areas. A study was carried out at Tunisia station to evaluate the effect of crops in the rotation on evaluation and some nutrient status. Crops involved wheat, barley, oat, and faba bean. Results showed that fallow maintained the original SOC content during all the cropping season followed by faba bean species. Significant difference was observed in residual SOC content left under fallow and various plant at harvest (P=0.0367) we observed that only fallow maintained the original SOC content at the end of the cropping season. All used crops have decreased the level of the original SOC. fallow maintained the higher total soil nitrogen level than various plant species (P=0.0018) during all cropping system. For the mean of all plant species, the total nitrogen was greater during March 22 followed by in the order of February 7 and March 7. At harvest, total nitrogen was influenced by plant species (P=0.0356), it reduced to 16% in fallow treatment and was 7.2% higher total nitrogen concentration than barley pots 20.7% than oat, 23.4% than wheat and 28.2% than faba bean treatment. The mineralized organic matter was more during the first period from February 7 to April 22