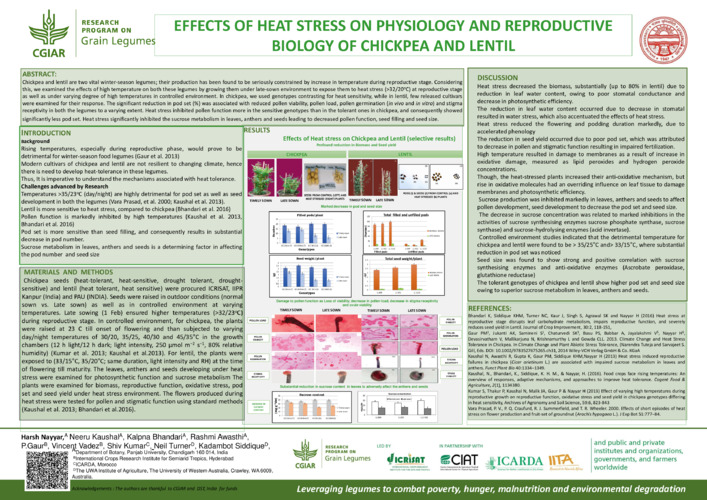 Shiv Kumar Agrawal. (31/12/2016). Effects of heat stress on physiology and reproductive biology of chickpea and lentil.

Chickpea and lentil are two vital winter-season legumes; their production has been found to be seriously constrained by increase in temperature during reproductive stage. Considering this, we examined the effects of high temperature on both these legumes by growing them under late-sown environment to expose them to heat stress (>32/20oC) at reproductive stage as well as under varying degree of high temperatures in controlled environment. In chickpea, we used genotypes contrasting for heat sensitivity, while in lentil, few released cultivars were examined for their response. The significant reduction in pod set (%) was associated with reduced pollen viability, pollen load, pollen germination (in vivo and in vitro) and stigma receptivity in both the legumes to a varying extent. Heat stress inhibited pollen function more in the sensitive genotypes than in the tolerant ones in chickpea, and consequently showed significantly less pod set. Heat stress significantly inhibited the sucrose metabolism in leaves, anthers and seeds leading to decreased pollen function, seed filling and seed size.