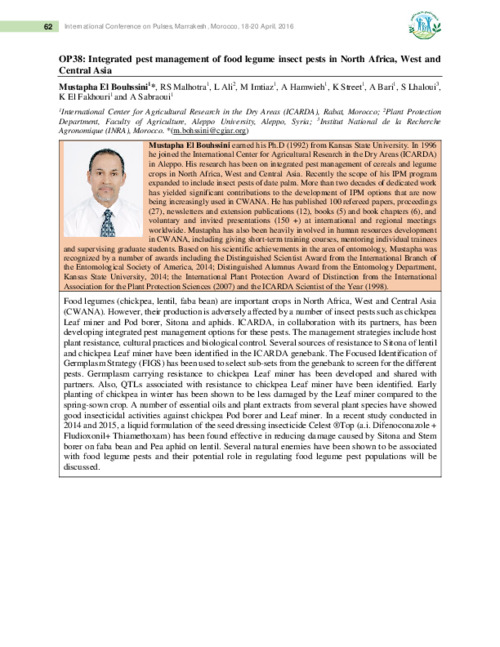 Food legumes (chickpea, lentil, faba bean) are important crops in North Africa, West and Central Asia (CWANA). However, their production is adversely affected by a number of insect pests such as chickpea Leaf miner and Pod borer, Sitona and aphids. ICARDA, in collaboration with its partners, has been developing integrated pest management options for these pests. The management strategies include host plant resistance, cultural practices and biological control. Several sources of resistance to Sitona of lentil and chickpea Leaf miner have been identified in the ICARDA genebank. The Focused Identification of Germplasm Strategy (FIGS) has been used to select sub-sets from the genebank to screen for the different pests. Germplasm carrying resistance to chickpea Leaf miner has been developed and shared with partners. Also, QTLs associated with resistance to chickpea Leaf miner have been identified. Early planting of chickpea in winter has been shown to be less damaged by the Leaf miner compared to the spring-sown crop. A number of essential oils and plant extracts from several plant species have showed good insecticidal activities against chickpea Pod borer and Leaf miner. In a recent study conducted in 2014 and 2015, a liquid formulation of the seed dressing insecticide Celest ®Top (a.i. Difenoconazole + Fludioxonil+ Thiamethoxam) has been found effective in reducing damage caused by Sitona and Stem borer on faba bean and Pea aphid on lentil. Several natural enemies have been shown to be associated with food legume pests and their potential role in regulating food legume pest populations will be discussed.