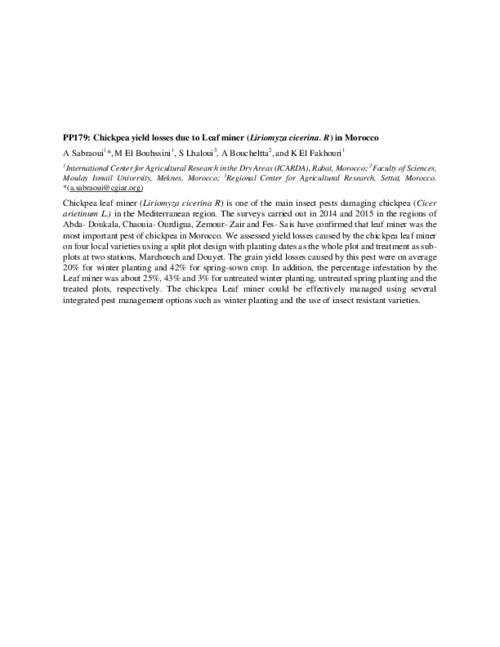 Chickpea leaf miner (Liriomyza cicerina R) is one of the main insect pests damaging chickpea (Cicer arietinum L.) in the Mediterranean region. The surveys carried out in 2014 and 2015 in the regions of Abda- Doukala, Chaouia- Ourdigua, Zemour- Zair and Fes- Sais have confirmed that leaf miner was the most important pest of chickpea in Morocco. We assessed yield losses caused by the chickpea leaf miner on four local varieties using a split plot design with planting dates as the whole plot and treatment as subplots at two stations, Marchouch and Douyet. The grain yield losses caused by this pest were on average 20% for winter planting and 42% for spring-sown crop. In addition, the percentage infestation by the Leaf miner was about 25%, 43% and 3% for untreated winter planting, untreated spring planting and the treated plots, respectively. The chickpea Leaf miner could be effectively managed using several integrated pest management options such as winter planting and the use of insect resistant varieties.