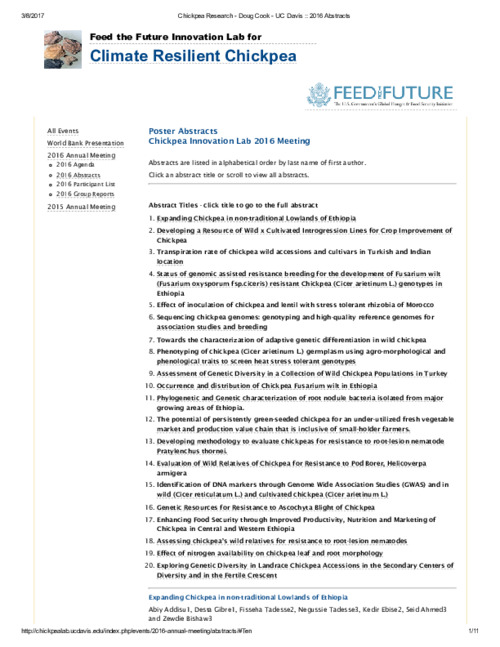 Frequent drought is affecting the mixed farming and agro-pastoral communities in Ethiopia. In the Agro-pastoral lowlands, maize, sorghum and common bean are the key crops produced by famers when rainfall is favorable. However, during severe drought or erratic rainfall patterns, these crops do not yield enough grain to feed the communities, generate incomes and feed to their livestock. In order to diversify the cropping system in two in irrigated and rainfed lowlands, non-traditional crops (wheat, barley, chickpea, lentil, and cowpea) were evaluated by farmers in 2014/15 cropping season. The season was very dry in the rainfed lowlands, and all crops failed to produce grain for the farming communities. In both rain fed and irrigated sites, the kabuli chickpea cv. Habru was selected by farmers. The average seed yield of chickpea in the rain fed low land was more than 1.5t/ha compared to total failure of maize and other tradition crops grown in the area during severe drought. The introduction of high yielding and Ascochyta blight resistant chickpea in the rainfed lowlands is one of the options to diversify the farming system and prevent complete crop losses due to drought and erratic rainfall patterns. Besides producing acceptable yield, chickpea and cowpea were not attacked by termite which is a key pest in the low lands. In the irrigated areas, the yield was higher than 2t/ha and can be used to improve land productivity in the cotton-fallow cropping system. In conclusion, adoption of new crops like chickpea to diversify farming system can improve the resilience of farmers in dry areas. The breeding programs of EIAR and ICARDA should further develop chickpea cultivars with high yield (seed and biomass),large seeded resistant to foliar diseases and responsive to supplementary irrigation.