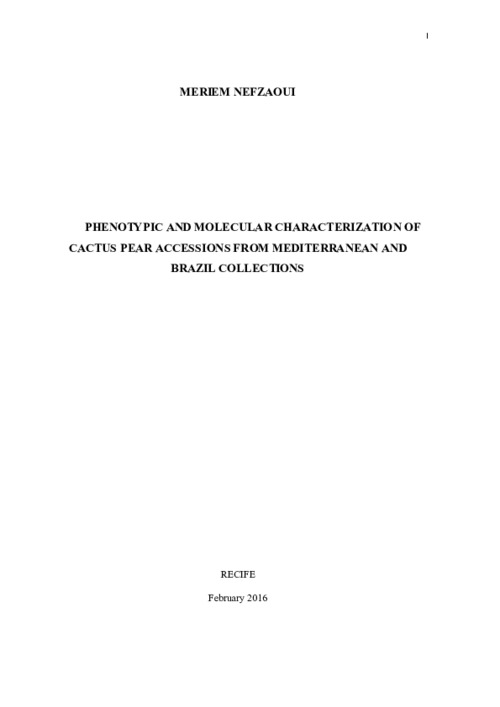 Around 2.5 billion people – 30 percent of the world’s population – live in the dry areas, which cover more than 40 percent of the world’s land surface. Scarce natural resources, land degradation and frequent droughts severely challenge food production in these areas. Both North Africa (Morocco, Algeria, Tunisia) and the North East of Brazil fall under arid and semi-arid climate. Cacti have developed phenological, physiological and structural adaptations for growth and survival in arid environments where they have multiple functions (food, feed, soil conservation, etc.). Cacti are well positioned to cope with future global climate change; they can generate, under arid conditions, a carbon sequestration equivalent to 30 tons of CO2 ha-1year-1. Cactus pear, the most commonly cropped belongs to the genus Opuntia and compared to other species, Opuntia ficus-indica is the most spread over all continents. The continuous morphological variation within the genus, the lack of clear descriptors for each species, and the relative ease of cross hybridization has led to an erroneous species designation. To overcome these problems, molecular markers might be useful tools to help unravel uncertainties in classification that are not addressed by morphological characterization. The objective of this contribution is to assess the genetic diversity of two cactus collections using morphological and molecular traits. The in situ collections are located at IPA in Northeast of Brazil with 300 accessions oriented toward forage production and at INRA Agadir station with 20 accessions representative of the Mediterranean Basin. Phenotypic characterization was achieved using FAO Cactusnet descriptor while the molecular characterization used the SSR technique and 8 recently recommended primers (Opuntia 3, Opuntia 5, Opuntia 9, Opuntia 11, Opuntia 12, Opuntia 13, Ops 9 and Ops 24). Phenotypic data have been submitted to principal component analysis (PCA) and agglomerative hierarchical clustering (AHC) using XLSTAT 2015 package. The Unweighted Pair Group Method with Arithmetic Mean (UPGMA) dendrogram based on Nei’s genetic distance has been used for molecular, and the relationship between morphological and molecular traits was assessed by Mantel test. Results show that accessions may be discriminated by the morphological descriptors. Many of these morphological descriptors are significantly correlated as the number of cladodes and the number of fruits (r=0.73), the number of cladodes and the plant diameter (r=0.73), the length of the cladode V and the plant height (r=0.7), the length of the spine and the number of areoles (r=0.67). PCA and AHC are good tools to segregate accessions using a reduced number of morphological descriptors. The cladode shape and the number of spines and areoles are the recommended descriptors, and are capable de discriminate accessions with a suitable accuracy. SSR analysis revealed 72 alleles with an average allele number of 9 per locus. All microsatellites used were found to be discriminative with a mean value of Polymorphic Information Content (PIC) estimated at 0.458. Genetic dissimilarities estimated between the accessions varied widely, suggesting that an important genetic variability exist in the collection. All the markers used were either informative or highly informative and can be recommended to detect genetic diversity in Opuntia species; the most discriminant markers are Ops 24 and Opuntia 9 and the less discriminant is Opuntia 5. The relationship between phenotypic traits and the allele based genetic distances from the SSR analysis was highly significant (r=0.4, p=0.01) and obtained for the first time while using SSR for molecular characterization. Consequently, SSR technique is one of the best tools to assess the level of genetic diversity in Opuntia germplasm collections; it complements phenotypic characterization and it is recommended for planning breeding programs and to revise the current taxonomical classification.