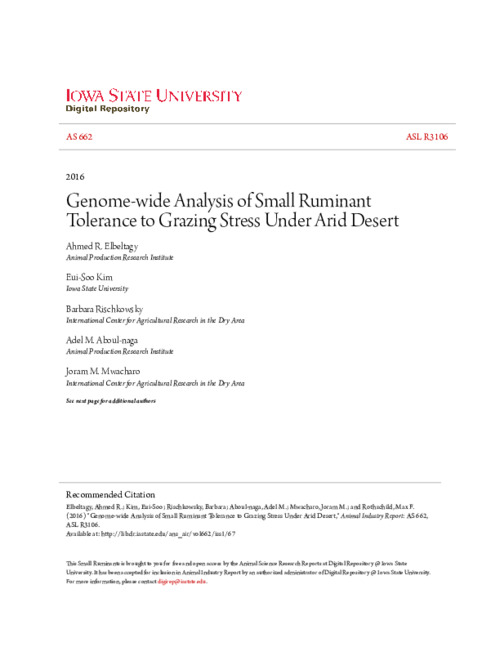 There are three major hot and dry deserts in North America, all located in the Western United States and Northern Mexico. Desert areas are facing serious environmental challenges, most importantly drought and water shortages caused, to a large extent, by global warming which have been reducing agricultural production and rural community incomes. Therefore the need for adapted livestock populations that can cope with increasing stresses occasioned by desert climate change and still be able to produce economically to support agricultural industries in desert communities is becoming a priority. In this study we utilized several genetic approaches to analyze genotype data generated using sheep and goat 50K Illumina SNP Beadchips to investigate tolerance to grazing stress in desert sheep and goats. For signatures of selection (SS) analyses, which detect regions in the genome under natural selection, genotype data were from 394 and 366 Egyptian desert sheep and goats, and 895 and 464 non- desert sheep and goats, respectively. For genome wide association analyses (GWAS), which detect genomic regions associated with grazing-stress-affected physiological parameters, data from 182 and 151 Barki sheep and goats, were analyzed. Several candidate regions exhibiting selection signatures were observed in both species. Results could prove useful in genomic selection and identification of genes involved in desert stress tolerance.