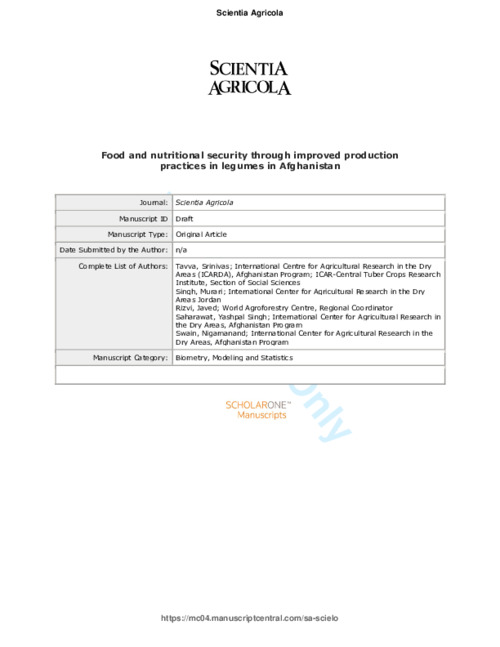 Restricted maximum likelihood method was used to assess the performance of introduced improved varieties of chickpea and mungbean (an important plant protein source in Afghanistan) in comparison to local varieties using 272 farmer participatory demonstrations laid out in eight districts of Baghlan, Mazar and Uruzgan provinces in Afghanistan from 2009 to 2012. Effect of these introduced varieties on enhancing food and nutrition security of farmers adopting such technologies was also assessed. On an average and over the analysis period, improved varieties out yielded local ones by 19 and 33% in case of chickpea varieties Madad and Sehat, respectively while in case of mungbean varieties, Mai-2008 and Maash-2008, yielded 19 and 33% more, respectively. Though there is significant yield difference between improved and local varieties of both crops, difference between the improved varieties of chickpea was not significant while it was significant in case of mungbean. The study revealed a non-zero variance component for variety type [improved vs. local] × year within district interaction on the yield of chickpea while none of the interactions in mungbean had positive variance component. Risk analysis showed that with a chosen probability of 90%, the improved varieties yield more than local varieties in both the crops (>1.0 t ha-1). The study highlighted the scope to improve the food and nutrition security in Afghanistan through improved productivity of pulses.