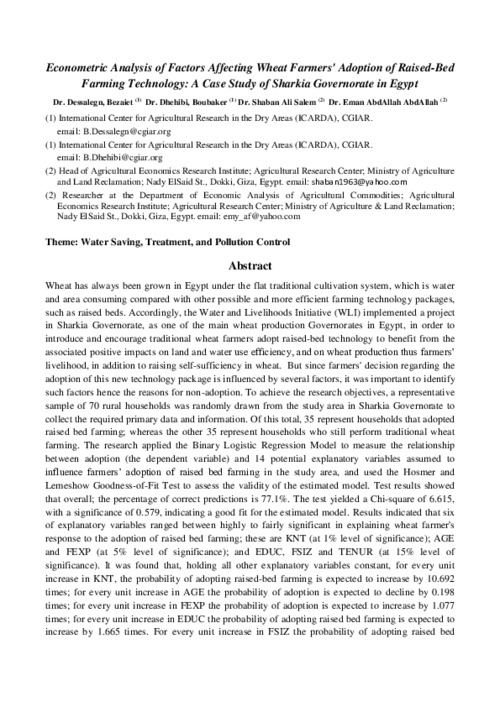 Wheat has always been grown in Egypt under the flat traditional cultivation system, which is water and area consuming compared with other possible and more efficient farming technology packages, such as raised beds. Accordingly, the Water and Livelihoods Initiative (WLI) implemented a project in Sharkia Governorate, as one of the main wheat production Governorates in Egypt, in order to introduce and encourage traditional wheat farmers adopt raised-bed technology to benefit from the associated positive impacts on land and water use efficiency, and on wheat production thus farmers’ livelihood, in addition to raising self-sufficiency in wheat. But since farmers' decision regarding the adoption of this new technology package is influenced by several factors, it was important to identify such factors hence the reasons for non-adoption. To achieve the research objectives, a representative sample of 70 rural households was randomly drawn from the study area in Sharkia Governorate to collect the required primary data and information. Of this total, 35 represent households that adopted raised bed farming; whereas the other 35 represent households who still perform traditional wheat farming. The research applied the Binary Logistic Regression Model to measure the relationship between adoption (the dependent variable) and 14 potential explanatory variables assumed to influence farmers’ adoption of raised bed farming in the study area, and used the Hosmer and Lemeshow Goodness-of-Fit Test to assess the validity of the estimated model. Test results showed that overall; the percentage of correct predictions is 77.1%. The test yielded a Chi-square of 6.615, with a significance of 0.579, indicating a good fit for the estimated model. Results indicated that six of explanatory variables ranged between highly to fairly significant in explaining wheat farmer's response to the adoption of raised bed farming; these are KNT (at 1% level of significance); AGE and FEXP (at 5% level of significance); and EDUC, FSIZ and TENUR (at 15% level of significance). It was found that, holding all other explanatory variables constant, for every unit increase in KNT, the probability of adopting raised-bed farming is expected to increase by 10.692 times; for every unit increase in AGE the probability of adoption is expected to decline by 0.198 times; for every unit increase in FEXP the probability of adoption is expected to increase by 1.077 times; for every unit increase in EDUC the probability of adopting raised bed farming is expected to increase by 1.665 times. For every unit increase in FSIZ the probability of adopting raised bed technology is expected to increase by 3.038 times; and for every unit increase in land ownership, the probability of adopting raised bed farming is expected to increase by 4.154 times. It is therefore recommended to formulate a set of policies and alternative instruments that aim to: activate the role of agricultural extension in providing farmers with information and updates on appropriate new farming systems and technology packages in order to increase their knowledge about the introduced technology package and associated benefits, in addition to providing technical assistance services and organizing training programs to transfer the know-how to wheat farmers, especially young farmers. It is also recommended to develop policies that aim to improve young farmers' level of education. There is also a need for activating the role of agricultural cooperative societies in providing the machinery required for implementing raised-bed technology package to tenant farmers at a reasonable cost, which will contribute to convincing them adopt the introduced new technology package. Such recommendations are expected to improve water and land use efficiency in old lands by saving irrigation water, improving net return per water unit, saving inputs’ costs, and raising crop productivity. Finally, the policy implication that emerges from these findings is that the WLI project should be targeted to similar Old Land areas.