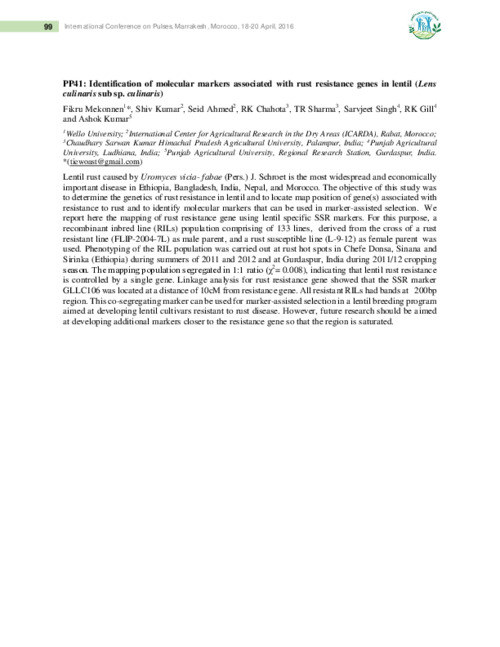 Lentil rust caused by Uromyces vicia- fabae (Pers.) J. Schroet is the most widespread and economically important disease in Ethiopia, Bangladesh, India, Nepal, and Morocco. The objective of this study was to determine the genetics of rust resistance in lentil and to locate map position of gene(s) associated with resistance to rust and to identify molecular markers that can be used in marker-assisted selection. We report here the mapping of rust resistance gene using lentil specific SSR markers. For this purpose, a recombinant inbred line (RILs) population comprising of 133 lines, derived from the cross of a rust resistant line (FLIP-2004-7L) as male parent, and a rust susceptible line (L-9-12) as female parent was used. Phenotyping of the RIL population was carried out at rust hot spots in Chefe Donsa, Sinana and Sirinka (Ethiopia) during summers of 2011 and 2012 and at Gurdaspur, India during 2011/12 cropping season. The mapping population segregated in 1:1 ratio (χ2= 0.008), indicating that lentil rust resistance is controlled by a single gene. Linkage analysis for rust resistance gene showed that the SSR marker GLLC106 was located at a distance of 10cM from resistance gene. All resistant RILs had bands at 200bp region. This co-segregating marker can be used for marker-assisted selection in a lentil breeding program aimed at developing lentil cultivars resistant to rust disease. However, future research should be aimed at developing additional markers closer to the resistance gene so that the region is saturated.