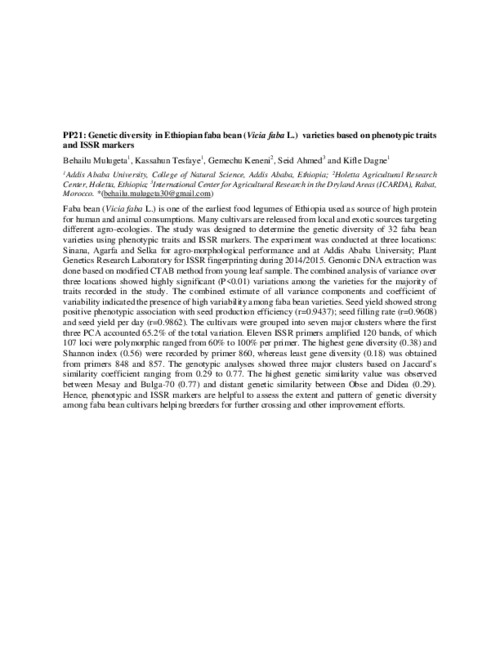 Faba bean (Vicia faba L.) is one of the earliest food legumes of Ethiopia used as source of high protein for human and animal consumptions. Many cultivars are released from local and exotic sources targeting different agro-ecologies. The study was designed to determine the genetic diversity of 32 faba bean varieties using phenotypic traits and ISSR markers. The experiment was conducted at three locations: Sinana, Agarfa and Selka for agro-morphological performance and at Addis Ababa University; Plant Genetics Research Laboratory for ISSR fingerprinting during 2014/2015. Genomic DNA extraction was done based on modified CTAB method from young leaf sample. The combined analysis of variance over three locations showed highly significant (P<0.01) variations among the varieties for the majority of traits recorded in the study. The combined estimate of all variance components and coefficient of variability indicated the presence of high variability among faba bean varieties. Seed yield showed strong positive phenotypic association with seed production efficiency (r=0.9437); seed filling rate (r=0.9608) and seed yield per day (r=0.9862). The cultivars were grouped into seven major clusters where the first three PCA accounted 65.2% of the total variation. Eleven ISSR primers amplified 120 bands, of which 107 loci were polymorphic ranged from 60% to 100% per primer. The highest gene diversity (0.38) and Shannon index (0.56) were recorded by primer 860, whereas least gene diversity (0.18) was obtained from primers 848 and 857. The genotypic analyses showed three major clusters based on Jaccard’s similarity coefficient ranging from 0.29 to 0.77. The highest genetic similarity value was observed between Mesay and Bulga-70 (0.77) and distant genetic similarity between Obse and Didea (0.29). Hence, phenotypic and ISSR markers are helpful to assess the extent and pattern of genetic diversity among faba bean cultivars helping breeders for further crossing and other improvement efforts.