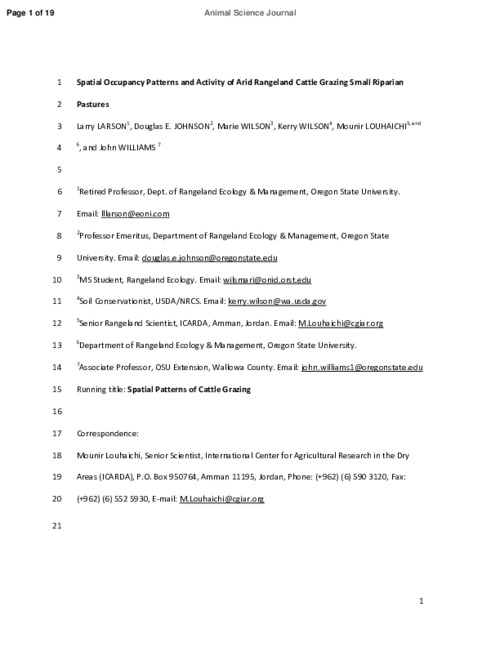 The spatial occupancy patterns and activity of cattle grazing three riparian pastures was investigated in northeastern Oregon using Global Positioning System (GPS) collars logging at 1-sec intervals. Cattle consistently selected plant communities as grazing areas that had forage in sufficient volume to meet their requirements and favored communities as resting areas that were dry and open. Cattle were stationary for more than 50% of the time in each pasture and consistently rested between dark and 04:00 hours. Interaction with stream channels was found to be 1-2% of total occupancy time and occurred on less than 10% of channel length. Cattle were indifferent or avoided channel areas relative to their area and, when in this zone, they spent most of their time moving not resting. Cattle did not prefer the stream bank zone and spent only 2% of their time in that zone. When occupied, the stream bank zone was used as a travel corridor to gain access to water or cross the channel to access other pasture areas. These results are in contrast with the general belief that cattle are a primary occupant of the stream bank/channel area; additional research is needed to define factors influencing cattle occupancy.