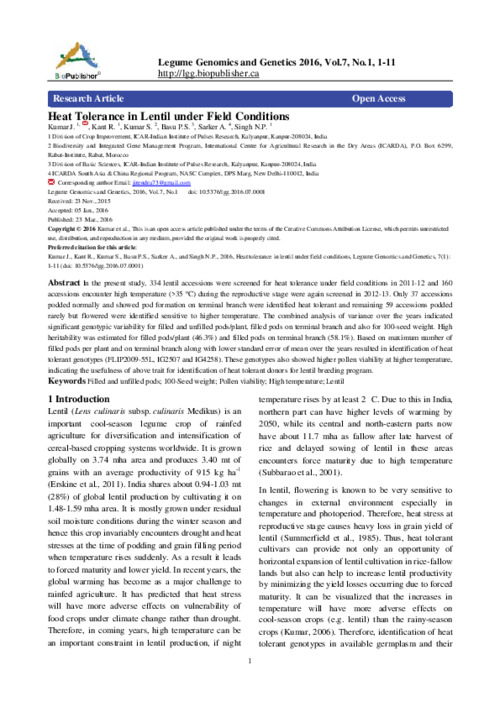 In the present study, 334 lentil accessions were screened for heat tolerance under field conditions in 2011-12 and 160 accessions encounter high temperature (>35 oC) during the reproductive stage were again screened in 2012-13. Only 37 accessions podded normally and showed pod formation on terminal branch were identified heat tolerant and remaining 59 accessions podded rarely but flowered were identified sensitive to higher temperature. The combined analysis of variance over the years indicated significant genotypic variability for filled and unfilled pods/plant, filled pods on terminal branch and also for 100-seed weight. High heritability was estimated for filled pods/plant (46.3%) and filled pods on terminal branch (58.1%). Based on maximum number of filled pods per plant and on terminal branch along with lower standard error of mean over the years resulted in identification of heat tolerant genotypes (FLIP2009-55L, IG2507 and IG4258). These genotypes also showed higher pollen viability at higher temperature, indicating the usefulness of above trait for identification of heat tolerant donors for lentil breeding program.