Wheat Landacres Production on Farm Level in Turkey: Who is Growing in Where? 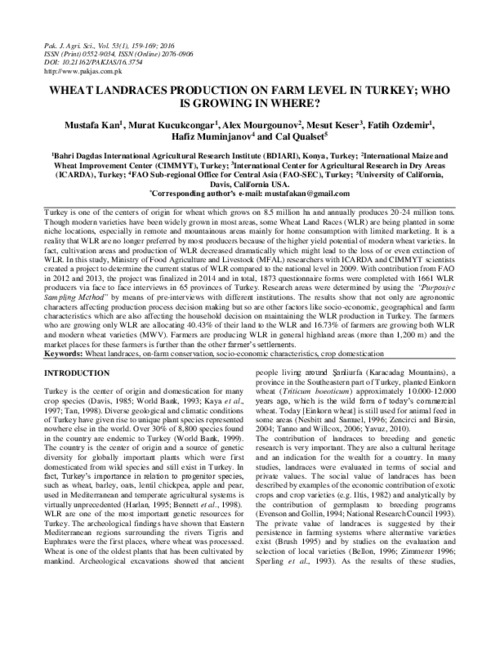 Turkey is one of the centers of origin for wheat which grows on 8.5 million ha and annually produces 20-24 million tons. Though modern varieties have been widely grown in most areas, some Wheat Land Races (WLR) are being planted in some niche locations, especially in remote and mountainous areas mainly for home consumption with limited marketing. It is a reality that WLR are no longer preferred by most producers because of the higher yield potential of modern wheat varieties. In fact, cultivation areas and production of WLR decreased dramatically which might lead to the loss of or even extinction of WLR. In this study, Ministry of Food Agriculture and Livestock (MFAL) researchers with ICARDA and CIMMYT scientists created a project to determine the current status of WLR compared to the national level in 2009. With contribution from FAO in 2012 and 2013, the project was finalized in 2014 and in total, 1873 questionnaire forms were completed with 1661 WLR producers via face to face interviews in 65 provinces of Turkey. Research areas were determined by using the “Purposive Sampling Method” by means of pre-interviews with different institutions. The results show that not only are agronomic characters affecting production process decision making but so are other factors like socio-economic, geographical and farm characteristics which are also affecting the household decision on maintaining the WLR production in Turkey. The farmers who are growing only WLR are allocating 40.43% of their land to the WLR and 16.73% of farmers are growing both WLR and modern wheat varieties (MWV). Farmers are producing WLR in general highland areas (more than 1,200 m) and the market places for these farmers is further than the other farmer’s settlements.