Chickpea genetic resources and its utilization in India: Current status and future prospects 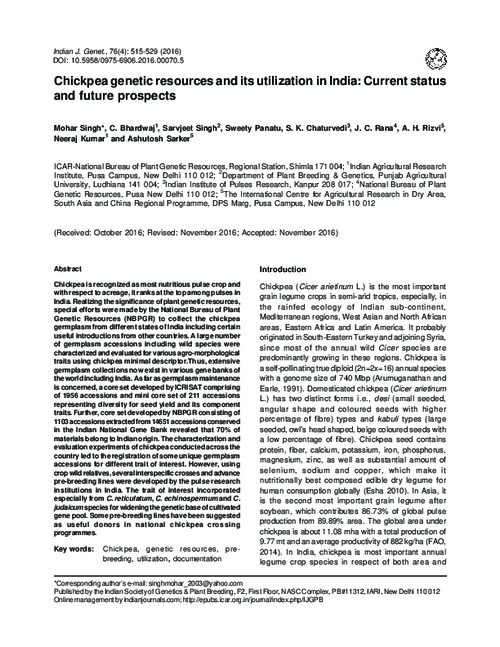 Chickpea is recognized as most nutritious pulse crop and with respect to acreage, it ranks at the top among pulses in India. Realizing the significance of plant genetic resources, special efforts were made by the National Bureau of Plant Genetic Resources (NBPGR) to collect the chickpea germplasm from different states of India including certain useful introductions from other countries. A large number of germplasm accessions including wild species were characterized and evaluated for various agro-morphological traits using chickpea minimal descriptor.Thus, extensive germplasm collections now exist in various gene banks of the world including India. As far as germplasm maintenance is concerned, a core set developed by ICRISAT comprising of 1956 accessions and mini core set of 211 accessions representing diversity for seed yield and its component traits. Further, core set developed by NBPGR consisting of 1103 accessions extracted from 14651 accessions conserved in the Indian National Gene Bank revealed that 70% of materials belong to Indian origin. The characterization and evaluation experiments of chickpea conducted across the country led to the registration of some unique germplasm accessions for different trait of interest. However, using crop wild relatives, several interspecific crosses and advance pre-breeding lines were developed by the pulse research institutions in India. The trait of interest incorporated especially from C. reticulatum, C. echinospermum and C. judaicum species for widening the genetic base of cultivated gene pool. Some pre-breeding lines have been suggested as useful donors in national chickpea crossing programmes.