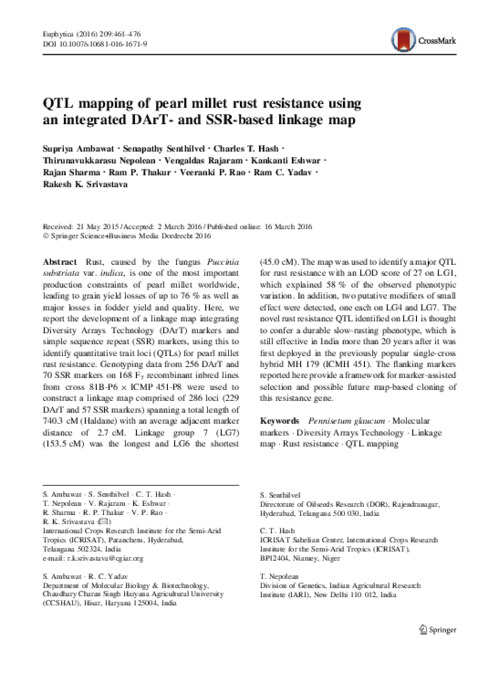 Rust, caused by the fungus Puccinia substriata var. indica, is one of the most important production constraints of pearl millet worldwide, leading to grain yield losses of up to 76 % as well as major losses in fodder yield and quality. Here, we report the development of a linkage map integrating Diversity Arrays Technology (DArT) markers and simple sequence repeat (SSR) markers, using this to identify quantitative trait loci (QTLs) for pearl millet rust resistance. Genotyping data from 256 DArT and 70 SSR markers on 168 F7 recombinant inbred lines from cross 81B-P6 9 ICMP 451-P8 were used to construct a linkage map comprised of 286 loci (229 DArT and 57 SSR markers) spanning a total length of 740.3 cM (Haldane) with an average adjacent marker distance of 2.7 cM. Linkage group 7 (LG7) (153.5 cM) was the longest and LG6 the shortest (45.0 cM). The map was used to identify a major QTL for rust resistance with an LOD score of 27 on LG1, which explained 58 % of the observed phenotypic variation. In addition, two putative modifiers of small effect were detected, one each on LG4 and LG7. The novel rust resistance QTL identified on LG1 is thought to confer a durable slow-rusting phenotype, which is still effective in India more than 20 years after it was first deployed in the previously popular single-cross hybrid MH 179 (ICMH 451). The flanking markers reported here provide a framework for marker-assisted selection and possible future map-based cloning of this resistance gene.