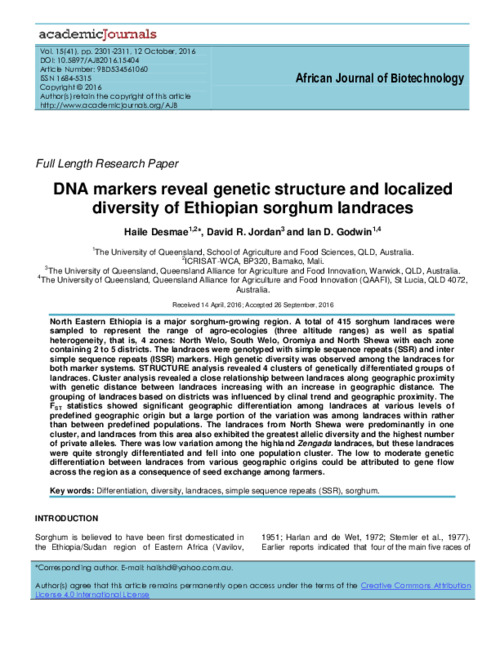 North Eastern Ethiopia is a major sorghum-growing region. A total of 415 sorghum landraces were sampled to represent the range of agro-ecologies (three altitude ranges) as well as spatial heterogeneity, that is, 4 zones: North Welo, South Welo, Oromiya and North Shewa with each zone containing 2 to 5 districts. The landraces were genotyped with simple sequence repeats (SSR) and inter simple sequence repeats (ISSR) markers. High genetic diversity was observed among the landraces for both marker systems. STRUCTURE analysis revealed 4 clusters of genetically differentiated groups of landraces. Cluster analysis revealed a close relationship between landraces along geographic proximity with genetic distance between landraces increasing with an increase in geographic distance. The grouping of landraces based on districts was influenced by clinal trend and geographic proximity. The FST statistics showed significant geographic differentiation among landraces at various levels of predefined geographic origin but a large portion of the variation was among landraces within rather than between predefined populations. The landraces from North Shewa were predominantly in one cluster, and landraces from this area also exhibited the greatest allelic diversity and the highest number of private alleles. There was low variation among the highland Zengada landraces, but these landraces were quite strongly differentiated and fell into one population cluster. The low to moderate genetic differentiation between landraces from various geographic origins could be attributed to gene flow across the region as a consequence of seed exchange among farmers.