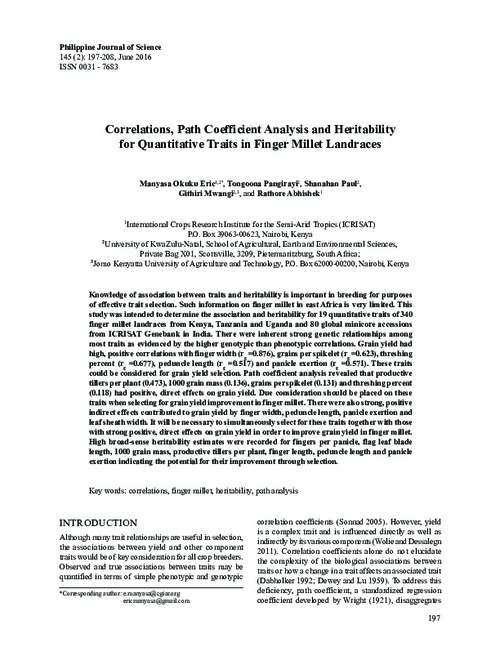 Knowledge of association between traits and heritability is important in breeding for purposes of effective trait selection. Such information on finger millet in east Africa is very limited. This study was intended to determine the association and heritability for 19 quantitative traits of 340 finger millet landraces from Kenya, Tanzania and Uganda and 80 global minicore accessions from ICRISAT Genebank in India. There were inherent strong genetic relationships among most traits as evidenced by the higher genotypic than phenotypic correlations. Grain yield had high, positive correlations with finger width (rg =0.876), grains per spikelet (rg =0.623), threshing percent (rg =0.677), peduncle length (rg =0.517) and panicle exertion (rg =0.571). These traits could be considered for grain yield selection. Path coefficient analysis revealed that productive tillers per plant (0.473), 1000 grain mass (0.136), grains per spikelet (0.131) and threshing percent (0.118) had positive, direct effects on grain yield. Due consideration should be placed on these traits when selecting for grain yield improvement in finger millet. There were also strong, positive indirect effects contributed to grain yield by finger width, peduncle length, panicle exertion and leaf sheath width. It will be necessary to simultaneously select for these traits together with those with strong positive, direct effects on grain yield in order to improve grain yield in finger millet. High broad-sense heritability estimates were recorded for fingers per panicle, flag leaf blade length, 1000 grain mass, productive tillers per plant, finger length, peduncle length and panicle exertion indicating the potential for their improvement through selection.