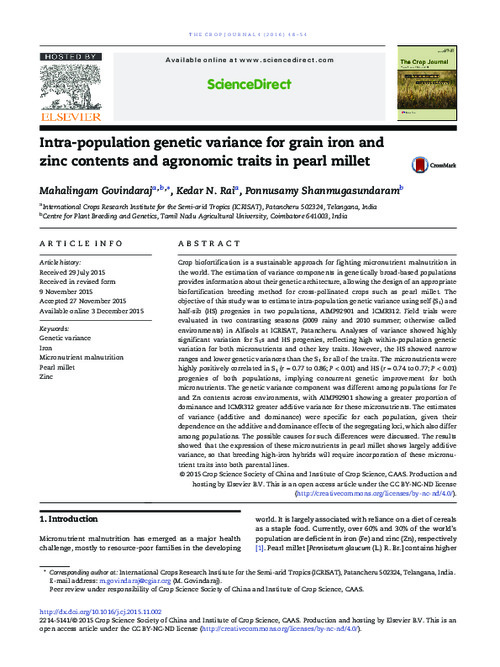 Crop biofortification is a sustainable approach for fighting micronutrient malnutrition in the world. The estimation of variance components in genetically broad-based populations provides information about their genetic architecture, allowing the design of an appropriate biofortification breeding method for cross-pollinated crops such as pearl millet. The objective of this study was to estimate intra-population genetic variance using self (S1) and half-sib (HS) progenies in two populations, AIMP92901 and ICMR312. Field trials were evaluated in two contrasting seasons (2009 rainy and 2010 summer; otherwise called environments) in Alfisols at ICRISAT, Patancheru. Analyses of variance showed highly significant variation for S1s and HS progenies, reflecting high within-population genetic variation for both micronutrients and other key traits. However, the HS showed narrow ranges and lower genetic variances than the S1 for all of the traits. The micronutrients were highly positively correlated in S1 (r = 0.77 to 0.86; P < 0.01) and HS (r = 0.74 to 0.77; P < 0.01) progenies of both populations, implying concurrent genetic improvement for both micronutrients. The genetic variance component was different among populations for Fe and Zn contents across environments, with AIMP92901 showing a greater proportion of dominance and ICMR312 greater additive variance for these micronutrients. The estimates of variance (additive and dominance) were specific for each population, given their dependence on the additive and dominance effects of the segregating loci, which also differ among populations. The possible causes for such differences were discussed. The results showed that the expression of these micronutrients in pearl millet shows largely additive variance, so that breeding high-iron hybrids will require incorporation of these micronutrient traits into both parental lines