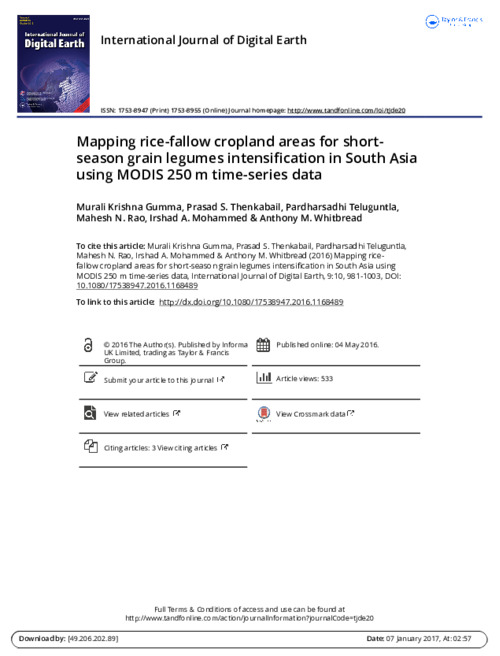 The goal of this study was to map rainfed and irrigated rice-fallow cropland areas across South Asia, using MODIS 250 m time-series data and identify where the farming system may be intensified by the inclusion of a shortseason crop during the fallow period. Rice-fallow cropland areas are those areas where rice is grown during the kharif growing season (June–October), followed by a fallow during the rabi season (November–February). These cropland areas are not suitable for growing rabi-season rice due to their high water needs, but are suitable for a short -season (≤3 months), low water-consuming grain legumes such as chickpea (Cicer arietinum L.), black gram, green gram, and lentils. Intensification (double-cropping) in this manner can improve smallholder farmer’s incomes and soil health via rich nitrogen-fixation legume crops as well as address food security challenges of ballooning populations without having to expand croplands. Several grain legumes, primarily chickpea, are increasingly grown across Asia as a source of income for smallholder farmers and at the same time providing rich and cheap source of protein that can improve the nutritional quality of diets in the region. The suitability of rainfed and irrigated rice-fallow croplands for grain legume cultivation across South Asia were defined by these identifiers: (a) rice crop is grown during the primary (kharif) crop growing season or during the north-west monsoon season (June–October); (b) same croplands are left fallow during the second (rabi) season or during the south-east monsoon season (November–February); and (c) ability to support low water-consuming, short-growing season (≤3 months) grain legumes (chickpea, black gram, green gram, and lentils) during rabi season. Existing irrigated or rainfed crops such as rice or wheat that were grown during kharif were not considered suitable for growing during the rabi season, because the moisture/water demand of these crops is too high. The study established cropland classes based on the every 16-day 250 m normalized difference vegetation index (NDVI) time series for one year (June 2010–May 2011) of Moderate Resolution Imaging Spectroradiometer (MODIS) data, using spectral matching techniques (SMTs), and extensive field knowledge. Map accuracy was evaluated based on independent ground survey data as well as compared with available sub-national level statistics. The producers’ and users’ accuracies of the cropland fallow classes were between 75% and 82%. The overall accuracy and the kappa coefficient estimated for rice classes were 82% and 0.79, respectively. The analysis estimated approximately 22.3 Mha of suitable rice-fallow areas in South Asia, with 88.3% in India, 0.5% in Pakistan, 1.1% in Sri Lanka, 8.7% in Bangladesh, 1.4% in Nepal, and 0.02% in Bhutan. Decision-makers can target these areas for sustainable intensification of short-duration grain legumes.