Dietary Interventions for Type 2 Diabetes: How Millet Comes to Help 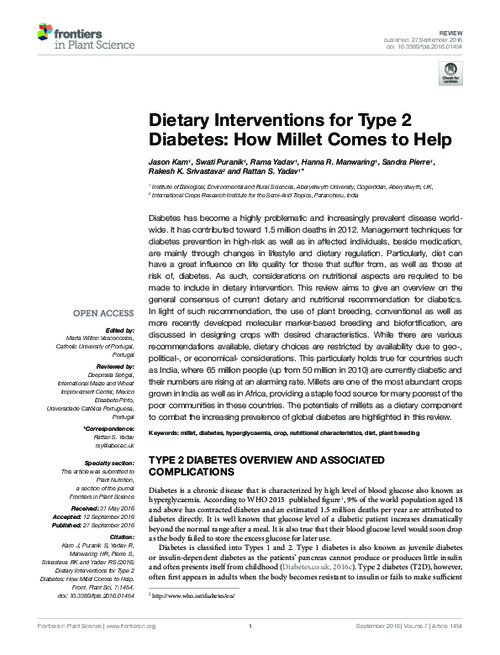 Diabetes has become a highly problematic and increasingly prevalent disease worldwide. It has contributed toward 1.5 million deaths in 2012. Management techniques for diabetes prevention in high-risk as well as in affected individuals, beside medication, are mainly through changes in lifestyle and dietary regulation. Particularly, diet can have a great influence on life quality for those that suffer from, as well as those at risk of, diabetes. As such, considerations on nutritional aspects are required to be made to include in dietary intervention. This review aims to give an overview on the general consensus of current dietary and nutritional recommendation for diabetics. In light of such recommendation, the use of plant breeding, conventional as well as more recently developed molecular marker-based breeding and biofortification, are discussed in designing crops with desired characteristics. While there are various recommendations available, dietary choices are restricted by availability due to geo-, political-, or economical- considerations. This particularly holds true for countries such as India, where 65 million people (up from 50 million in 2010) are currently diabetic and their numbers are rising at an alarming rate. Millets are one of the most abundant crops grown in India as well as in Africa, providing a staple food source for many poorest of the poor communities in these countries. The potentials of millets as a dietary component to combat the increasing prevalence of global diabetes are highlighted in this review