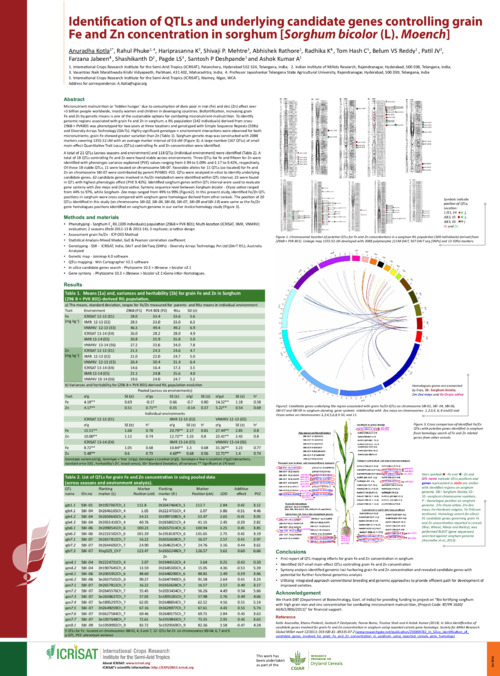 Biofortification is one of sustainable options for combating micronutrientmalnutrition. For identifying genomic regions associated with grain Fe and Zn in sorghum, RIL population (342 individuals) from cross 296B × PVK 801 was phenotyped for two years at three locations and genotyped with SSRs and DArTs. Highly significant genotype×environment interactions were observed for both micronutrients; grain Fe showed greater variation than Zn. Sorghum genetic map was constructed with 2088 markers (1148 DArTs, 927 DArT Seqs and 13 SSRs) covering 1355.52 cM with an average marker interval of 0.6cM. A total of 18 QTLs controlling Fe and Zn were found stable across environments. Three QTLs for Fe and 15 for Zn were identified with phenotypic variance explained (PVE) values ranging from 3.94 to 5.09% and 3.17 to 9.42%, respectively. Of these 18 stable QTLs, 11 were located on chromosome SBI07. Favorable alleles for 11 QTLs (colocated) for Fe and Zn on chromosome SBI07 were contributed by parent PVK801P23. QTLs were analyzed insilico to identify underlying candidate genes, 62 candidate genes involved in Fe/Zn metabolism were identified within QTL interval; twentythree were found in QTL with highest phenotypic effect (PVE 9.42%). Sorghum genes underlying Fe/Zn QTLs were used to analyze gene synteny with rice and maize. Synteny sequence level between sorghumrice ranged from 44% to 97%, while sorghummaize ranged from 49% to 99%. QTLs/candidate/novel genes along with the marker/genetic resources identified through this study can help in developing high Fe and Zn lines in costeffective and efficient manner.